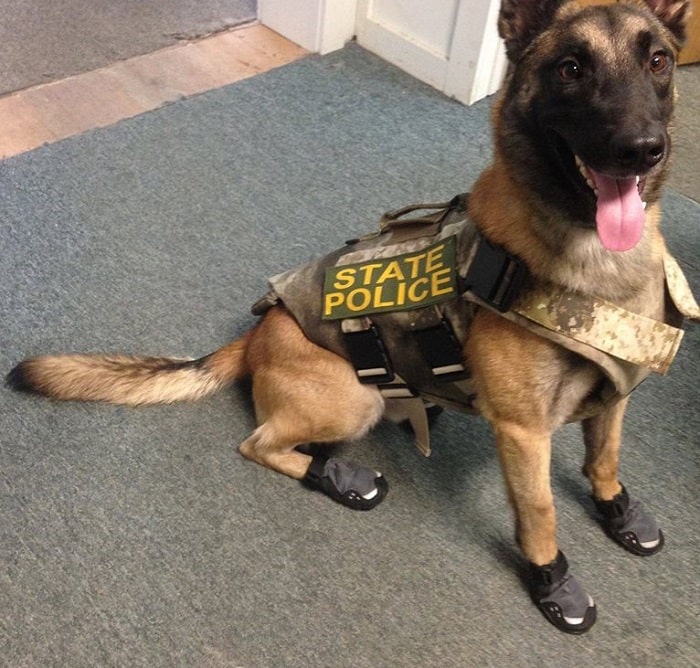 Turns out the Starks from Game of Thrones were right, winter is here now and while our winter is not as bad as in Westeros, it still can get quite frigid. Also, unlike , some dog breeds are ill-equipped to handle the freezing cold. A police dog is certainly no exception to this, hence one of them gets prepared for winter in a rather adorable fashion, with shoes!

Just Walk It Off GIF from Funny GIFs

an’t really argue with that. A dog in uniform leads a life as dangerous as his handlers.’ More so this winter in places like South Dakota where temperatures can plummet as low as -9C. So the Rapid City Police Department in South Dakota equipped Jary, a Belgian Malinois with winter-gear, a.k.a. boots for paws. Problem is, finds it an alien experience:

Yep, if you ever wanted to see an adult dog reduced to an uncoordinated puppy, all you need to do is make them wear shoes. He did try taking them off by lifting his feet as high as he could to no avail. Of course, those shoes can be a lifesaver for Jary and other dogs as well because their rubbery paws can easily get stuck on the ice ground in negative temperatures.

As a police dog, job is to sniff out narcotics operations in checkpoints. Now, he won’t have to worry about the elements of nature getting in the way of his job. That is, as soon as he gets used to those snow boots. No worries, plenty of dogs have mastered the art of Prada:

Recent trends have reported that K-pop fans in the US are getting mixed in with current issues in politics. K-pop fan communities are using online platforms to rally up and protest against racism in the United States. In support of the #BlackLivesMatter movement, the online K-pop community has come together in protest. Never has it… END_OF_DOCUMENT_TOKEN_TO_BE_REPLACED

Just this week, lawmakers approved a bill establishing the District of Columbia (D.C.) as the 51st state of the United States of America. This is after multiple calls and protests from the citizens to finally consider D.C. as a state.  However, the bill is not out of the woods yet as it faces multiple oppositions… END_OF_DOCUMENT_TOKEN_TO_BE_REPLACED