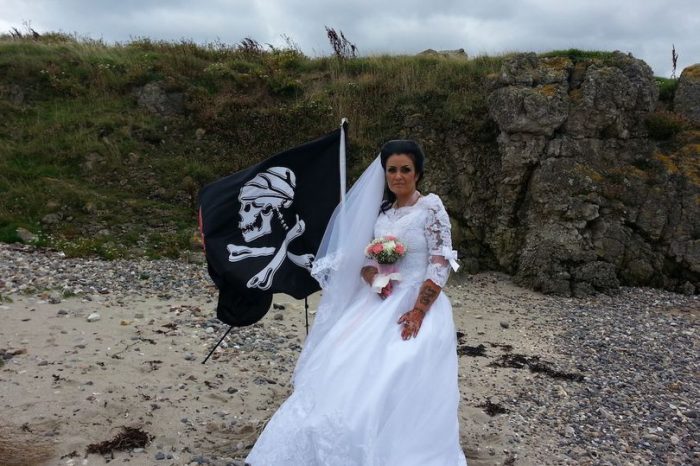 Arrgh!, I mean, ahh, marriage, the best thing you can do for the human race… assuming you have plans to start a family. However, the definition of marriage can be rather… open for a lot of people. Really, it could be anything this day and age, like being married to a 300-year-old pirate ghost husband like what one Irish woman did.

Hold your seahorses with all those rated ARRGH! jokes, however, as like all marriages, 45-year-old Amanda Teague’s marriage with her 300-year-old Haitian pirate ghost husband named Jack, is already over. Amanda did not reveal much information on why the marriage was over quickly. We’re guessing the couple did not see to aye.

“So I feel it’s time to let everyone know that my marriage is over. I will explain all in due course but for now all I want to say is be VERY careful when dabbling in spirituality, it’s not something to mess with,” warned Amanda of potential single ladies who are on the hunt for Patrick Swayze-looking ghosts to marry and make pottery coitus with.

Jack and Amanda met approximately six years ago when the long-dead (since the 1700s) Haitian pirate “visited” her in her bedroom. Their romance officially began in 2014 after Amanda realized that she started having feelings for Jack. So, they got married early this year. Here’s the ceremony:

Now, if you are wondering how Amanda and her ex-matey Jack actually married; it was through a medium who allowed the swashbuckling poltergeist a chance at marriage with a living human woman. Apparently, the wedding between them was also as legally binding as it can be. Jack was also even allowed to say “I do,” with the help of the medium.

But alas! The marriage did not last long, maybe because they got into an Arrgh!-. No more booty for dead old Jack. But hey, Amanda is now free for a “hook”-up.

Together with the fireworks for the Independence Day weekend, the latest explosive Hollywood news involves no one else but the controversial Kanye West. The famous celebrity has revealed his plans for a presidential run. Originally planned for 2024, he has stated that he is actually going to run for the 2020 Presidential elections in November. The… END_OF_DOCUMENT_TOKEN_TO_BE_REPLACED

Recent trends have reported that K-pop fans in the US are getting mixed in with current issues in politics. K-pop fan communities are using online platforms to rally up and protest against racism in the United States. In support of the #BlackLivesMatter movement, the online K-pop community has come together in protest. Never has it… END_OF_DOCUMENT_TOKEN_TO_BE_REPLACED