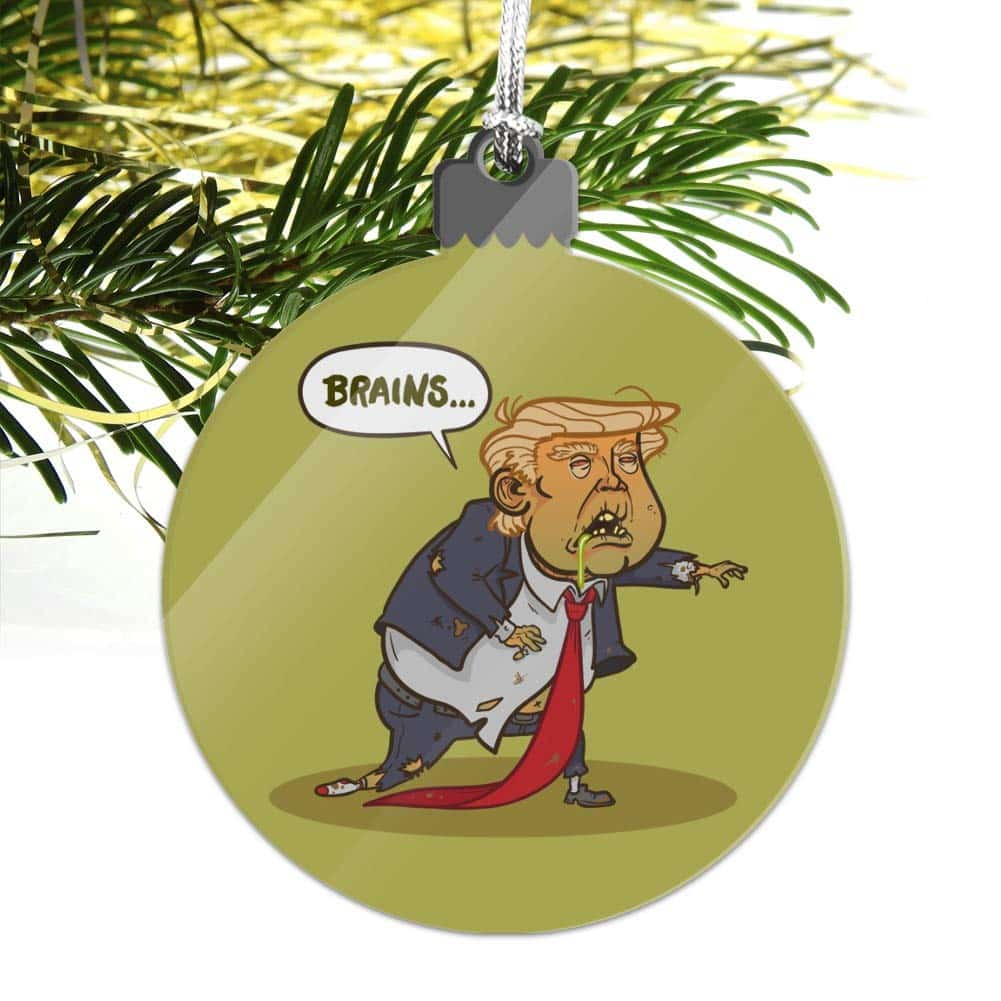 Piss off your conservative in-laws by hanging an anti-Trump Christmas ornament on your tree that asks Santa for a new president. Or, better yet, sneak one onto their tree! Whether you’re in need of a grab bag gift worthy of causing a bit of chaos or someone on your Christmas list is in need of a good laugh, then consider getting one of these hilarious anti-Trump Christmas tree ornaments.

Since all Trump seems to have done throughout his presidency is lie and ridicule others on Twitter, what better way to commemorate him than with a tweet ornament? It not only embodies the president’s classic good looks but also his favorite activity to pass the time. Whether you put it on your own tree or give it as a gift, this acrylic ornament will surely be a big hit!

Nothing says Christmas like the ugly mug of our president dangling from a tree branch. This cartoon-like replica of Trump is the perfect ornament for those on your gift list that aren’t always vocal on how they feel about politics these days. Whether they love him or hate him, this Christmas ornament could go either way.

Even though there’s no way in hell Trump would ever get his hands dirty and start laying bricks to get his infamous wall built, the image of him doing so is quite amusing. If there’s anyone in your family still convinced that the president will get his way in terms of the border wall, then this Christmas order just might be the kind of gift you’re looking for. What’s even better is that this hilarious Trump ornament comes with a few others that your Republican friends might actually love.

Looks like Trump’s naughty list is rather extensive this year! It includes everyone from Hillary Clinton to Ted Cruz, all who would receive far worse than some coal if Trump were playing Santa Clause this year. You’re likely to stir up some major political debates by adding this anti-Trump ornament to the family grab bag!

Imagine for a moment that Trump has a mental breakdown and decides to go to the Mexico border and start building himself. Now, this may seem , as we all know he would hire illegal immigrants to do this long before he got his own hands dirty. Perhaps that’s why he is so often depicted building with Legos instead of bricks like in this Trump ornament.

Rocket Man aka Kim Jong Un doesn’t exactly belong on a Christmas tree, but then again neither does Donald Trump. If you’re going to have a nut bag dictator on your tree though, might as well have him riding a rocket. Wrap up this unique ornament for your Secret Santa this year, and you’ll certainly get a good laugh out of them.

If the thought of Obama laughing his ass off as Trump struggles with his presidential responsibilities amuses you, then this acrylic Christmas ornament is perfect for your tree. While we all know that the former president is likely sitting at home with his wife poking fun at Trump’s stupidity on a regular basis, Obama has far too much class to do such a thing in public. So, this ornament is likely the best it will ever get.

It’s just a matter of time before we get a glimpse of Trump’s real mug shot, but until then, we have artistic renderings like this one to help us imagine what it will look like. This is the kind of Christmas ornament that would certainly get noticed quickly if you decide to sneak it on a family members tree. Bonus posints if they’re hardcore Trump fans! This mugshot Christmas ornament is truly one of a kind!

So, not exactly a tree ornament, but I just couldn’t create this list without including this hilarious Trump snowglobe. If you remember, Trump made it clear that he had little or no understanding of global warming when he commented on the weather in New York. “It’s freezing and snowing in New York – where is global warming when you need it?” he said, and all of his equally stupid fans laughed and cheered him on. This snowglobe would make the perfect gift for all of the climate change deniers on your Christmas list this year.

Trump Getting What He Deserves Ornament

This Christmas tree ornament depicts an image many of us on the left know and love. Likely the inspiration behind some of your favorite GIFs, we all kind of wish Obama would flip off Trump in front of the media. It would be a moment to go down in history as well as a light in this dark, dark Trump tunnel we’ve been stuck in. This anti-Trump ornament is the perfect gift for your douchy friend who is still convinced, after all of his screw-ups, that Trump is doing something positive for this country.

Is it a joke? Is it serious? Who can tell! This Make Christmas Great Again ornament resembles an old-school Bing Crosby album cover, and could really be taken either way. It’s the perfect grab bag gift, especially in a family of mixed political views. The liberals will get mad thinking it was intended to be taken seriously, and the conservatives will get mad thinking someone made a bad joke. No one has to know it was from you!

An alternative to the previous Twitter ornament, this angry Trump tweeting Christmas ornament is a bit more dimensional. The pursed lips make this option another hilarious portrayal of the president.

Likely because he doesn’t have one of his own, Trump is depicted in this image searching for brains. If your Christmas tree is horror themed, this Trump zombie ornament could be a classic and timeless addition to your collection.

Make your gift-giving skills GREAT AGAIN by adding some of these hilarious anti-Trump Christmas tree ornaments to your shopping list this year!