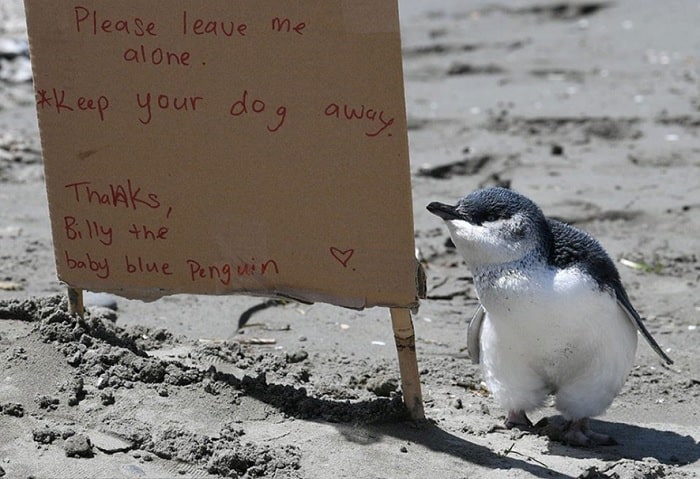 If you ever thought that human beings can get rather inhumane to their young, you probably have never seen how some wild animals treat their babies. Often, nature’s infants are baptized in so as to make them tough; survival of the fittest is the only and all. However, one abandoned baby penguin experiences kindness at the hands of humans after getting nature’s short end of the stick.

During one sunny day at a beach in Christchurch, New Zealand, a baby penguin was found alone and cold. Its species was called Eudyptula minor or literally little penguin because they are the smallest in the world. So you can imagine that the baby penguin is small and defenseless in such an unforgiving environment where infants are often prime targets for hungry predators.

Jeff Mein Smith was apparently concerned when he first saw the baby penguin all alone on the beach, So he thought to check on the little dude once he was done with his biking routine. Upon returning, however, Smith was surprised that someone already took the initiative and looked after the flightless bird. They even put a simple cardboard sign saying what the penguin might be up to and that people should keep their dogs away:

The sign attracted the attention of wildlife experts. They suggested that while the baby penguin might have been waiting for its mother to return the sign says, they also determined that the penguin looks to be around two months old. This was an age where little penguins are too old to still be a dependent.

Hence, they stepped in to lend the baby penguin a hand. They also discovered that the little guy was underweight for his size, meaning he did need help. It is now at the Christchurch Penguin Rehabilitation to recuperate its strength and gain weight before getting released into the wild where hopefully, it will get a fighting chance at survival.

The Blood Test, The Swab Test, and The Saliva Test      Essentially, there are three general types of COVID-19 testing produced so far. One is the rapid test, the second is the saliva test and the other is the swab test. The rapid test (also known as the anti-body test) uses blood samples. The swab test… END_OF_DOCUMENT_TOKEN_TO_BE_REPLACED

The COVID-19 pandemic is one of the biggest modern pandemics known in history. Currently, there are more than five million confirmed cases in the world, with a total of 333,000 deaths. A total of 1.6 million of these confirmed cases are in the US alone. The world is currently in a race of finding a… END_OF_DOCUMENT_TOKEN_TO_BE_REPLACED

Despite concrete data and research, people’s opinions will always be diverse when it comes to a variety of topics including religion, politics, gender, and more. Denial is a common reaction to many important discussions and serious world events. The COVID-19 pandemic does not differ from any issues and is subject to opinions from critiques all… END_OF_DOCUMENT_TOKEN_TO_BE_REPLACED

Back in January, when the Wuhan, China coronavirus broke out, it didn’t make it to the front page of newspapers, in print or virtual form. Today, January feels like a lifetime away. Like it or not, people around the world have adapted to the new normal – staying at home, frequent hand washing, and social… END_OF_DOCUMENT_TOKEN_TO_BE_REPLACED

Since the beginning of the year 2020, the whole world has been stupefied by the rapid spread of a deadly coronavirus known as COVID-19. World superpowers in the West were unable to prevent the virus from reaching their borders. Because of this fact, the novel coronavirus COVID-19 became a world-wide pandemic no less than three… END_OF_DOCUMENT_TOKEN_TO_BE_REPLACED

For months since the start of 2020, the attention of the world has focused on immediate response efforts to contain and combat the novel coronavirus, also known as COVID-19. The deadly virus has pushed millions of people into isolation.  This kept people in their homes for weeks and months away from their work, their friends,… END_OF_DOCUMENT_TOKEN_TO_BE_REPLACED