The internet is filled with tales of men harassing unlucky ladies on Tinder. Still, women are just as capable of being awful to our matches (not that that makes it ok for you to insult women who turn you down, guys).

A woman who fat-shamed her Tinder match has gone viral, after he gave her the clapback to end all clapbacks.

After matching on the app, “Becca” sent the guy a DM saying: “You’re very fat. I don’t like fat people. I accidentally liked you. I’m sorry.”

If you thought that wasn’t unnecessary enough, she didn’t stop there, adding: “Please don’t kill yourself. Someone will love you and your husky one day. Just not me. Cus I like normal sized people. Which you are not. So Bye.” 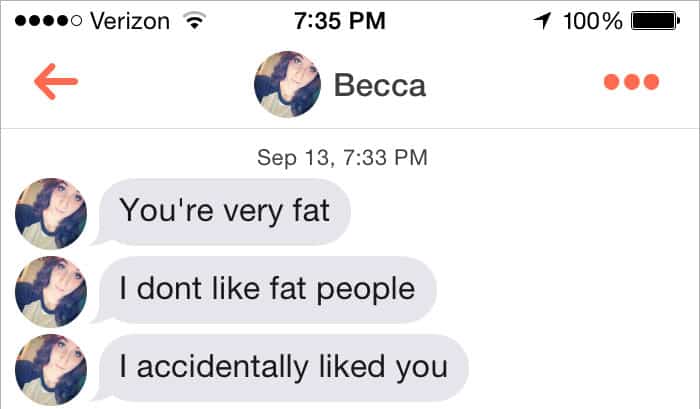 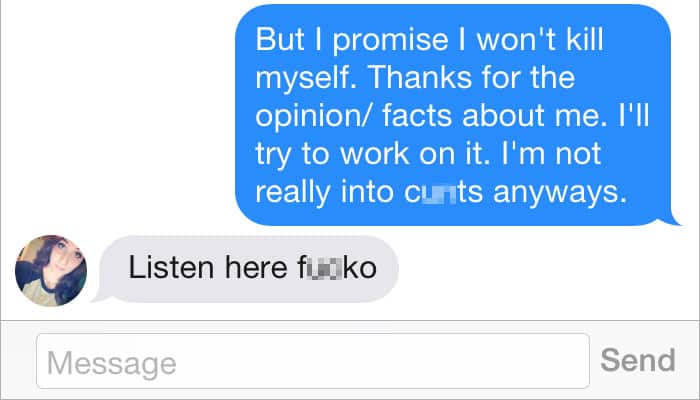 First of all, who doesn’t love huskies?! Secondly, just WOW.

But instead of losing his cool like most of us would have done, her match responded with: “Wait I’m fat?! When did that happen?

“But I promise I won’t kill myself. Thanks for the opinion/facts about me. I’ll try to work on it. I’m not really into c***s anyway.”

The girl tries to reignite the conversation with “listen here f***o,” before the message thread abruptly ends.

And people on Reddit were more than ready to shut her down along with him.

LostintheZone said: “Anyone can diet and fix a weight problem. There isn’t really a cure to being an a**hole though.”

While inzane added: “She must be a lot lighter than most people, not having a soul and all.”

Kightzeareau commented: “what a gross human being that girl is.”

Whereas eyeballnurse was not amused by the husky hate: “She must be a terrible person since she doesn’t like huskies! Who hates puppers?!”

She may have been awful, but at least he didn’t accidentally match with his sister.