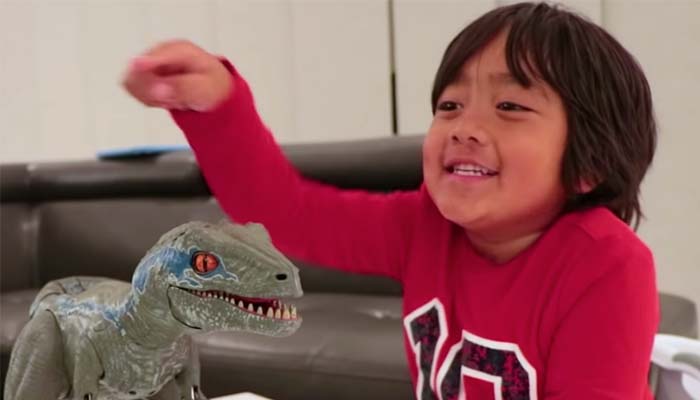 Prepare to be jealous of a kid.

According to Forbes, a seven-year-old boy has become YouTube’s highest earning star, after raking in $22 million reviewing toys.

Ryan, the brainchild behind Ryan ToysReview, earned the impressive sum for his video reviews between June 2017 and June 2018.

The youngster, who posts new videos almost every day, launched his channel in 2015 and has garnered a whopping 17 million followers and 26 million billion views in the three years since.

The child’s earnings were double the previous year’s.

When asked by NBC why his channel is such a hit, the now eight-year-old said: “Because I’m entertaining and I’m funny.”

However, Forbes said that most of Ryan’s money – $21 million of it, in fact –  comes from advertising before videos, so the more views, the more money the tyke makes.

Only $1 million of last year’s revenue was the result of sponsored posts, which is a relatively small amount compared to the other vloggers on the list and is mainly down the amount of deals Ryan’s parents choose to accept. That, and the under-10 demographic isn’t exactly rolling in it.

Still, the toys he features tend to sell out immediately.

The next YouTube star on the list was vlogger Jake Paul (brother of the controversial Logan Paul, this year’s number 10 spot), whose jokes earned him 3.5 million views and over $21 million in cash over the last year.

He was followed by sports comedy group Dude Perfect with almost $20 million, and Minecraft pro Daniel Middleton at roughly $18.5 million.

To compile their list, Forbes measured each YouTuber’s pre-tax earnings from June 2017 to June 2018, not including the money they pay out to lawyers, agents, and managers.

How to Grow A YouTube Channel Without Burning Out

Israel’s Iron Dome has protected the country against missile attacks for years. The Iron Dome in Israel is the biggest of its kind in the world. No other countries in the world use the same air defense system, meaning it is one of a kind. The tension between Israel and Gaza has been going on… END_OF_DOCUMENT_TOKEN_TO_BE_REPLACED

The world is devastated by the news that Britain’s Prince Philip, the Duke of Edinburgh, has died at the age of 99. Palace media confirms that the Duke has expired mid-day today, April 9th. The announcement did not contain any specifics on the cause of death. The United Kingdom will enter a state of national… END_OF_DOCUMENT_TOKEN_TO_BE_REPLACED

Who would have known that religious prophets would be among the most loyal supporters of former President Trump? In fact, it has been observed that the most conservative Christians may have been the right amount of push for Trump’s presidential win back in 2016. Since Trump’s election back in 2016, numerous self-proclaimed “prophets” have been… END_OF_DOCUMENT_TOKEN_TO_BE_REPLACED