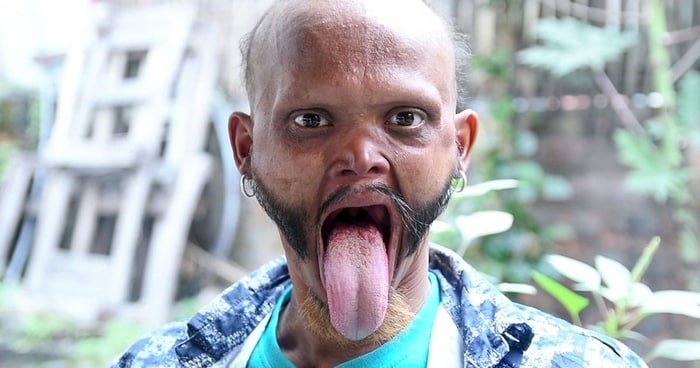 35-year-old Yagya Bahadur Katuwal, from Nepal, has the unparalleled ability to lick his own forehead – and, it is totally gross!

Before now we suppose you’ve tried to lick your own nose, and may have been able to (actually) do it … though, that feat saps in comparison to Mr. Katuwal.

A school bus driver, Katuwal’s found himself becoming a bit of a celebrity locally thanks to his odd talent, which has gone viral across social media in the past few weeks. But, he says he’s been warned not to attempt his trick while at work for fear of the ‘frightening the kids,’ which seems (more than) fair enough to us!

“Children never want to get close to me,” he stated. “Some even wet their pants!

“Even adults can lose consciousness when they watch me in action.

Puskar Neap, who elected to film and share Katuwal’s party trick last month, explained: “He’s physically and mentally fit – he discovered in the early age that he can lick his own forehead. He has just one tooth and that is what makes him able to do that-his skills are weird, yet amazing.”

This Guy Has So Much Talent, He Plays Metal Band Korn Music Using… Corn

Israel’s Iron Dome has protected the country against missile attacks for years. The Iron Dome in Israel is the biggest of its kind in the world. No other countries in the world use the same air defense system, meaning it is one of a kind. The tension between Israel and Gaza has been going on… END_OF_DOCUMENT_TOKEN_TO_BE_REPLACED

The world is devastated by the news that Britain’s Prince Philip, the Duke of Edinburgh, has died at the age of 99. Palace media confirms that the Duke has expired mid-day today, April 9th. The announcement did not contain any specifics on the cause of death. The United Kingdom will enter a state of national… END_OF_DOCUMENT_TOKEN_TO_BE_REPLACED

Who would have known that religious prophets would be among the most loyal supporters of former President Trump? In fact, it has been observed that the most conservative Christians may have been the right amount of push for Trump’s presidential win back in 2016. Since Trump’s election back in 2016, numerous self-proclaimed “prophets” have been… END_OF_DOCUMENT_TOKEN_TO_BE_REPLACED