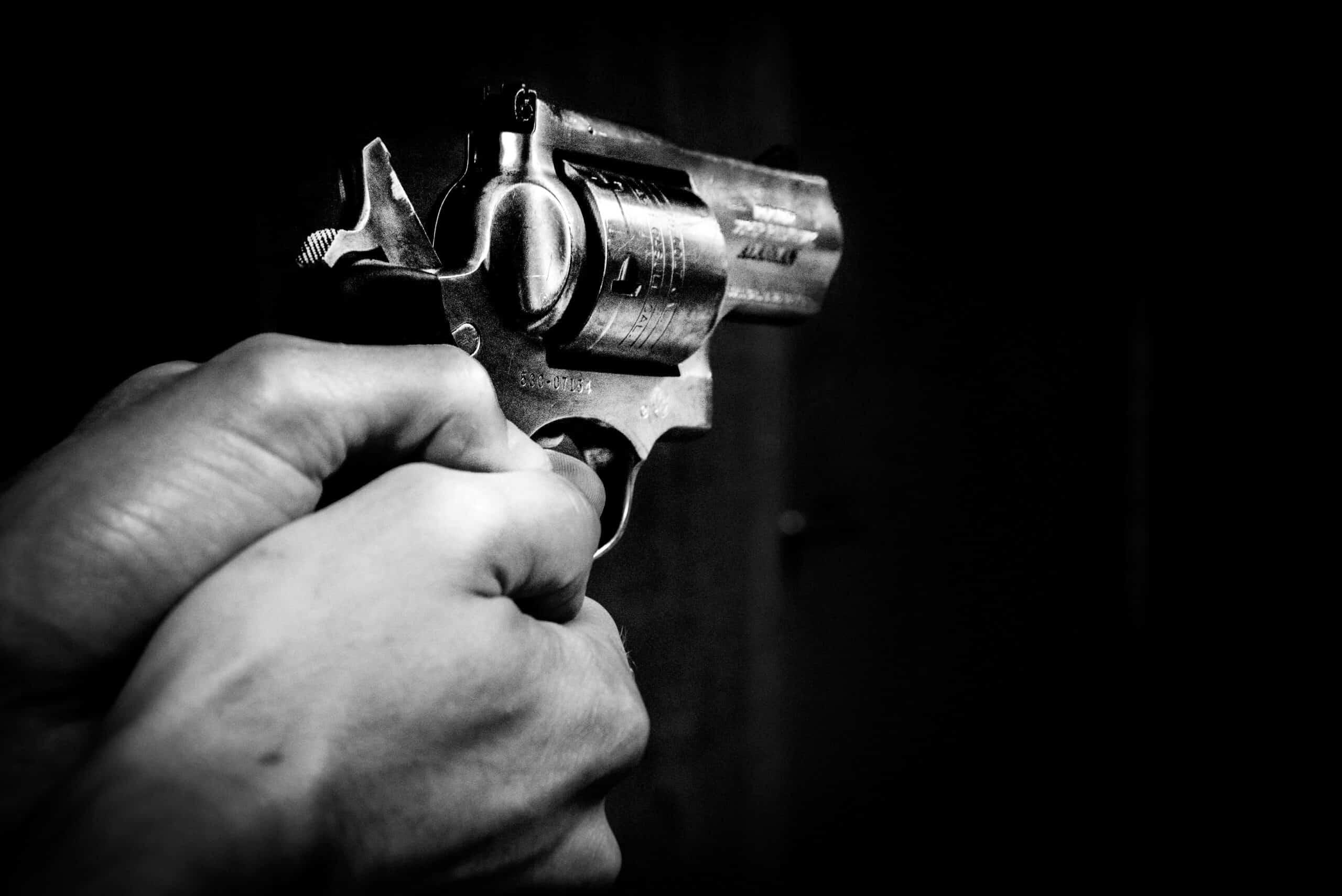 On Thanksgiving 2018, the United States got another messy, tragic example of the nation’s complicated relationship with guns and race. Wait, don’t go! I promise there will be jokes … just as soon as I find them …

But I digress. On Thursday, November 22, police officers in Hoover, Alabama responded to a report of shots fired at a popular mall sure to be overflowing with Black Friday shoppers. Arriving on the scene, the officers spotted a young black man with his weapon drawn, seemingly fleeing from the scene. The officers opened fire, shooting the man in the head. Minutes later, as the suspect bled out on the mall floor, police declared that they’d gotten their man. A few hours later, the name of the supposed shooter, Emantic Bradford, Jr., went out on television and radio outlets throughout the area.

See, not only was Emantic Bradford not the shooter, he was a veteran with a clean criminal record and spent his free time filling in as caretaker for his ailing father. Bradford was just trying to help, trying to use his legal firearm to turn himself into a “good guy with a gun.” Instead, he was shot to death by officers who failed to identify themselves, because the police didn’t see a “good guy with a gun,” they saw a black man with a gun.

Jesus, there has got to be a joke around here, somewhere.

You know what’s fucking rad? When some common American whips out a gun and serves up hot, steaming justice to some ne’er do well hoping to ruin everyone’s day. That’s why — on the spectacularly rare occasion when this happens — it gets pretty celebrated. Take this list from The Washington Times, for example, titled, “11 times a good guy with a gun stopped a bad guy, saving lives.”

It may as well be called “11 Times My Dick Got Hard Thinking About Dishing Out Vigilante Justice.”

Admittedly, most examples of justifiable homicide are incidents where some shit heel got shot because they barged into the home of a gun owner. You won’t get an argument from me on that front; owning a weapon is a constitutional right, so if you want to play “Good Guy With a Gun” on your own property, go for it.

Outside your home, however, the odds aren’t in your favor. You’re more likely to date a millionaire than you are to use your weapon to thwart some crime. So, stifle a chuckle watching this 71-year-old open fire on two 19-year-old would-be robbers who stormed into a Florida internet cafe, because it doesn’t happen very often.

Also, it’s worth mentioning that the gun the criminals were using had visible signs of rust and no bullets. The worst these internet cafe patrons were looking at was a stolen wallet and cell phone, until some old, white guy whipped out a gun and started going all John Wayne all over everyone’s ass.

By most accounts, however, Emantic Bradford, Jr. was playing it smart. He had his gun drawn but was focused on getting himself to safety, not saving the day. Not only did police fail to identify themselves before opening fire, but they followed up this grievous error by reporting Bradford as the shooter. This huge, gaping butthole of an error not only publicly shamed an innocent man, but it also allowed the real shooter time to escape.

For 20 hours, the official story was that Bradford was an attempted murderer even though all the police had to go on was two very superficial details. The shooter was black; so was Bradford. And Bradford had a gun. In the minds of that cop in Alabama, that must equal guilty, right?

At no point in the first several hours did it occur to police to contact Bradford’s family, not before they announced that Bradford was the killer, not before they realized their mistake and retracted the false claim. To date, the Hoover Police Department hasn’t released the video of the assault.

Blame This One on the Cops

The Hoover Police made some titanic mistakes, here. They scrambled to make themselves look competent before the actually did their job. In so doing, they smeared the name of a good man who was not only upstanding, he had friends on the local police force. It’s entirely plausible that Bradford thought, in pulling out his gun, that he was helping the situation.

When Bradford was killed, that was the result of one cop making a massive (and hopefully career-ending) mistake, but the mistakes didn’t stop there. On its quest to warrant “press release” status, the events that the Alabama mall (including Emantic Bradford’s name) must have crossed at least one or two desks. That means more than one employee working for the Hoover Police Department screwed up in a singularly colossal way.

Unless You Are a Cop, You Are Not a Good Guy With a Gun

Technically, it was some gun-waving nimrod at the NRA who coined the term “good guy with a gun.” In that guy’s defense, he was almost correct. The original phrase is just missing one pretty significant addition. It should read, “the only thing that stops a bad guy with a gun is a good guy with a gun and a badge.”

In the case of the Hoover Police Department, that sentiment failed outright. Their incompetence deserves to have a light shined on it. They deserve one hell of a lot of scrutiny for the series of foul-ups that lead to the assassination of Emantic Bradford’s character.

That said, the sense of safety his sidearm supposedly provided Emantic Bradford, Jr. did absolutely nothing to prevent a bad situation from getting worse (you could argue it did the opposite). That’s partially because he was instantaneously tried and sentenced by some trigger-happy police officers, but it was also because he bought into the same myth so many United States citizens adopt.

There’s a small part in every one of us that wants to use violence to prove our self-worth. You can point the finger at Vin Diesel, but before him, it was Bruce Willis, then Charles Bronson, Billy Jack, Errol Flynn, Tarzan. Hercules. It’s not the culture, it’s a response to something innately human. Our need to be a hero.

That’s why it’s a super extra lousy idea to put murder tools in the hands of people who feel that need more acutely than others (you know, men). Terrible cops can be fired; they can be regulated.

An irl “hero” with a gun trying to save the day is a problem with no solution.

Shocking Discovery: Thoughts & Prayers Are The Power Source Of The NRA

The world is devastated by the news that Britain’s Prince Philip, the Duke of Edinburgh, has died at the age of 99. Palace media confirms that the Duke has expired mid-day today, April 9th. The announcement did not contain any specifics on the cause of death. The United Kingdom will enter a state of national… END_OF_DOCUMENT_TOKEN_TO_BE_REPLACED

Who would have known that religious prophets would be among the most loyal supporters of former President Trump? In fact, it has been observed that the most conservative Christians may have been the right amount of push for Trump’s presidential win back in 2016. Since Trump’s election back in 2016, numerous self-proclaimed “prophets” have been… END_OF_DOCUMENT_TOKEN_TO_BE_REPLACED

President Biden falls and slips multiple times on the Airforce One Steps and PEOPLE ARE GOING CRAZY! What’s the big deal? Some people are hating, while others are making memes just for the fun of it. We are all human, aren’t we? Everyone’s expected to stumble some time in their lives. However, with the internet… END_OF_DOCUMENT_TOKEN_TO_BE_REPLACED