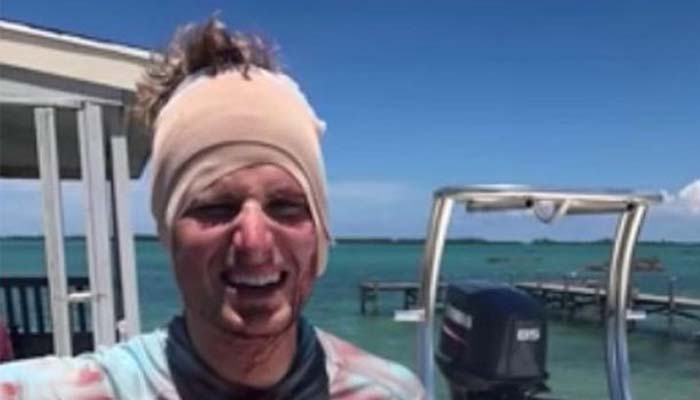 A spear fisherman is lucky to be alive after a reef shark bit a chunk out of his head, leaving him scarred for life.

Will Krause, from South Carolina, was spear-fishing with friend Zach Shipps in the northern Bahamas, when the shark attacked. The terrifying moment was caught on camera by Shipps, who happened to be wearing a GoPro at the time.

29-year-old Krause shared the footage for the first time this week, in a social media post expressing how pleased he was to see another Thanksgiving.

Taking to Facebook, he said: “This Thanksgiving, I’m thankful (more than ever) for God’s kindness & protection over our family.”

“I was 25 feet below the surface when the 6-7 ft Reef Shark struck the back of my head & neck.

“I miraculously escaped with several stitches, some gnarly scars, & a viral GoPro video (thanks to Zach Shipps & Stephen Murray).”

In the clip, Shipps is shown spearing a fish, when the shark comes into view from beneath him. The shark then heads for Krause, who was also spearing fish at the time, biting him on the back of his head and neck.

Once the shark was finished with Krause, Shipps rushed over to help his friend, before tending to his injuries onboard.

Considering the nature of the attack, Krause was fortunate to get away with just a concussion and stitches.

Speaking to Good Morning America, Krause admitted he heard the “crunch” of his head when the shark attacked, and thanked his shipmates for saving his life.

Attacks on humans by reef sharks have been recorded, but it’s their relatives – great whites, tigers, and bull sharks – that are responsible for the largest number of deadly, unprovoked attacks on people (although they’re still rare).

Seems it was just like yesterday when we all fought over and hoarded HEAPS of toilet paper for no reason at all. All the memories are rushing in as the US suffers from a gas shortage. As expected, gas shortage memes are everywhere to bring light to our currently sad situation. Along the US east… END_OF_DOCUMENT_TOKEN_TO_BE_REPLACED

Israel’s Iron Dome has protected the country against missile attacks for years. The Iron Dome in Israel is the biggest of its kind in the world. No other countries in the world use the same air defense system, meaning it is one of a kind. The tension between Israel and Gaza has been going on… END_OF_DOCUMENT_TOKEN_TO_BE_REPLACED

The world is devastated by the news that Britain’s Prince Philip, the Duke of Edinburgh, has died at the age of 99. Palace media confirms that the Duke has expired mid-day today, April 9th. The announcement did not contain any specifics on the cause of death. The United Kingdom will enter a state of national… END_OF_DOCUMENT_TOKEN_TO_BE_REPLACED