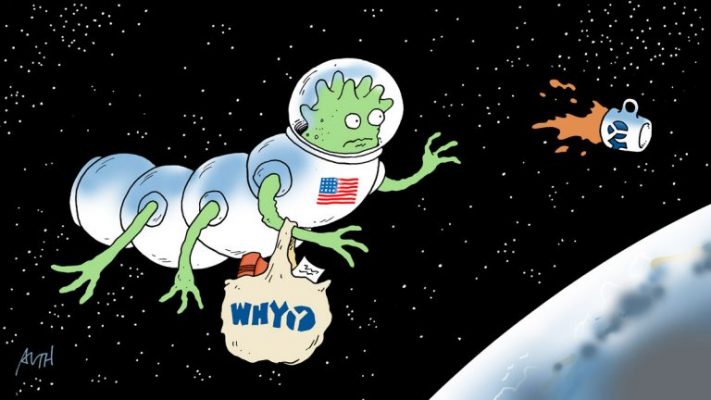 Space is certainly scary. Apart from the fact that the only thing separating astronauts from a cold, dark, and ugly death are pieces of metal and nylon, we also know zip about what lies beyond. It seems that the threats that humans face in space are also limitless, like space itself. Though it appears closer than we all think. Now, a deadlier than imagined threat exists in the International Space Station (ISS).

It is, however, far from “aliens” or clunky asteroids. The said threat is actually bacteria, something we all have and bring everywhere we go. To be more specific, the said space station is having a problem with the bacteria in their toilets aboard. These said bacteria have also seemingly become immune to antibiotics, meaning there is no killing them, according to their genomic analysis.

But don’t squash your dreams of being an astronaut just yet. At the moment, the said bacteria is of no threat to the astronauts aboard. They do not have the potential to become pathological just yet. Still, one of them, specifically the Enterobacter bugandensis, is an opportunistic pathogen, something that could potentially cause diseases in the future.

It would seem that bacteria that human beings brought along with them for a ride in space are also constantly adapting to their new environment. Some of them even do so faster than others. Prolonged exposure to such things can potentially weaken their immune system and could indeed pose a hurdle for space travel. Simply put, there’s no escaping germs, not even in space.

Concert In Space; The Final Frontier? Watch As Astronaut From The ISS Makes Music In Space

The Blood Test, The Swab Test, and The Saliva Test      Essentially, there are three general types of COVID-19 testing produced so far. One is the rapid test, the second is the saliva test and the other is the swab test. The rapid test (also known as the anti-body test) uses blood samples. The swab test… END_OF_DOCUMENT_TOKEN_TO_BE_REPLACED

The COVID-19 pandemic is one of the biggest modern pandemics known in history. Currently, there are more than five million confirmed cases in the world, with a total of 333,000 deaths. A total of 1.6 million of these confirmed cases are in the US alone. The world is currently in a race of finding a… END_OF_DOCUMENT_TOKEN_TO_BE_REPLACED

Despite concrete data and research, people’s opinions will always be diverse when it comes to a variety of topics including religion, politics, gender, and more. Denial is a common reaction to many important discussions and serious world events. The COVID-19 pandemic does not differ from any issues and is subject to opinions from critiques all… END_OF_DOCUMENT_TOKEN_TO_BE_REPLACED

Back in January, when the Wuhan, China coronavirus broke out, it didn’t make it to the front page of newspapers, in print or virtual form. Today, January feels like a lifetime away. Like it or not, people around the world have adapted to the new normal – staying at home, frequent hand washing, and social… END_OF_DOCUMENT_TOKEN_TO_BE_REPLACED

Since the beginning of the year 2020, the whole world has been stupefied by the rapid spread of a deadly coronavirus known as COVID-19. World superpowers in the West were unable to prevent the virus from reaching their borders. Because of this fact, the novel coronavirus COVID-19 became a world-wide pandemic no less than three… END_OF_DOCUMENT_TOKEN_TO_BE_REPLACED

For months since the start of 2020, the attention of the world has focused on immediate response efforts to contain and combat the novel coronavirus, also known as COVID-19. The deadly virus has pushed millions of people into isolation.  This kept people in their homes for weeks and months away from their work, their friends,… END_OF_DOCUMENT_TOKEN_TO_BE_REPLACED