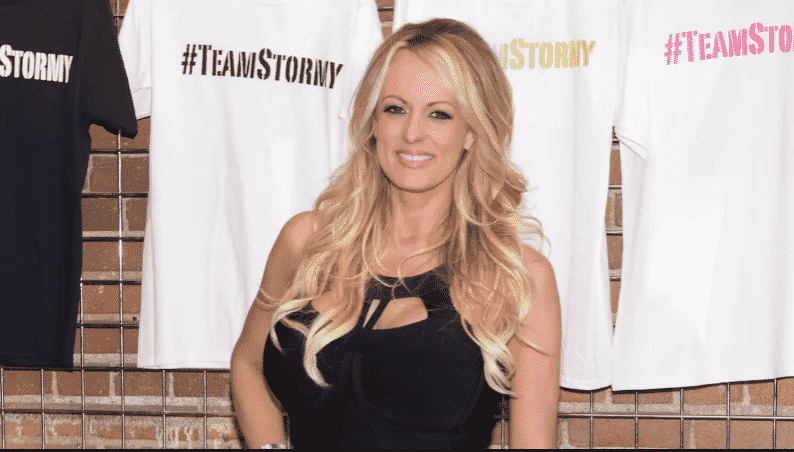 Stormy Daniels has become my new favorite person to follow on Twitter. Not only is she hilarious, but her comebacks are so epic that they give the Clapback Queen Chrissy Teigen a run for her money. Tweeting at the adult film star or commenting on one of her posts has become a risky maneuver as she loves to call out trolls. If you’re not following Stormy Daniels’ Twitter page, you’re seriously missing out. Here’s why:

1. Her Tweets Are Vulgar

A very aggressive piece of shit paparazzi shoved his camera up my skirt. I bet my pussy will be front page on UK tabloids tomorrow. Joke is on him though because everyone has already seen my vag. I'm glad I shaved today though. LOL

Daniels’ sense of humor is incredibly blunt and vulgar at times, a combination that I just can’t get enough of. Leave it to her to turn an incident with the paparazzi trying to take pictures up her skirt into a commentary about how everyone has seen her naked. This is just one of the many vulgar jokes she makes, something that not everyone seems to like. She has a way of shutting down the slut-shamers though.

Who says I'm not…? #multitasking https://t.co/esrd5ISDcK

There are a surprising amount of haters on Daniels’ Twitter page who have resorted to slut-shaming as their trolling method. Haven’t we decided to stop doing this? We wear the pink pussy hats, march with our signs, and flat out say that this is wrong yet we still have to deal with this sexist bullshit. Daniels’ responses are legendary though, and she really doesn’t let them get away with even the most basic jabs. She’s a sex worker who demands respect, a concept our country has been slow to grasp.

3. She’s An Activist For Sex Workers

“Sex workers are the very embodiment of the American dream. We are small business owners who want to make a better life for our loved ones, our communities, and ourselves.”

The stigma against sex workers has deep roots in America, especially against women in the business. Daniels gives a voice to those who work in the adult industry asking for respect and acknowledgment of their contributions. She offers a perspective that can better shape how our society treats women, regardless of their profession.

4. Her Clapbacks Are Epic

Fuck! Really? I was hoping he was humiliated. Note to self: be sluttier! https://t.co/3N38Hw1CmD

Stormy Daniels’ Twitter page is so full of clapbacks that nearly half of her posts are in response to an “unavailable” tweet. That’s right. She’s so brutally hilarious that most of the tweets she responded to were deleted due to humiliation. People love to publically put others down on social media but can’t handle being called out for it. When will they learn?

5. She Stands Up To Trump

Ladies and Gentlemen, may I present your president. In addition to his…umm…shortcomings, he has demonstrated his incompetence, hatred of women and lack of self control on Twitter AGAIN! And perhaps a penchant for bestiality. Game on, Tiny. https://t.co/6DpDD5ELtj

You have to hand it to the woman. She has risked everything to shed light on the kind of person we have leading our country and hasn’t backed down for even a moment. Daniels’ stands up for herself without losing her sense of humor, making Trump look like an even bigger fool for tweeting from the White House. Now, that’s talent!

I'd rather 10 million people look at my butthole than anyone see my Google search history or what's in my secret IPod playlist. #priorities https://t.co/lfea1r8E2G

If you thought her appearance on SNL was funny, you haven’t seen her best work. Imagine that sassy attitude without censorship, and that’s Stormy Daniels’ Twitter account for you. Follow her! You won’t regret it!

The Blood Test, The Swab Test, and The Saliva Test      Essentially, there are three general types of COVID-19 testing produced so far. One is the rapid test, the second is the saliva test and the other is the swab test. The rapid test (also known as the anti-body test) uses blood samples. The swab test… END_OF_DOCUMENT_TOKEN_TO_BE_REPLACED

The COVID-19 pandemic is one of the biggest modern pandemics known in history. Currently, there are more than five million confirmed cases in the world, with a total of 333,000 deaths. A total of 1.6 million of these confirmed cases are in the US alone. The world is currently in a race of finding a… END_OF_DOCUMENT_TOKEN_TO_BE_REPLACED

Despite concrete data and research, people’s opinions will always be diverse when it comes to a variety of topics including religion, politics, gender, and more. Denial is a common reaction to many important discussions and serious world events. The COVID-19 pandemic does not differ from any issues and is subject to opinions from critiques all… END_OF_DOCUMENT_TOKEN_TO_BE_REPLACED

Back in January, when the Wuhan, China coronavirus broke out, it didn’t make it to the front page of newspapers, in print or virtual form. Today, January feels like a lifetime away. Like it or not, people around the world have adapted to the new normal – staying at home, frequent hand washing, and social… END_OF_DOCUMENT_TOKEN_TO_BE_REPLACED

Since the beginning of the year 2020, the whole world has been stupefied by the rapid spread of a deadly coronavirus known as COVID-19. World superpowers in the West were unable to prevent the virus from reaching their borders. Because of this fact, the novel coronavirus COVID-19 became a world-wide pandemic no less than three… END_OF_DOCUMENT_TOKEN_TO_BE_REPLACED

For months since the start of 2020, the attention of the world has focused on immediate response efforts to contain and combat the novel coronavirus, also known as COVID-19. The deadly virus has pushed millions of people into isolation.  This kept people in their homes for weeks and months away from their work, their friends,… END_OF_DOCUMENT_TOKEN_TO_BE_REPLACED