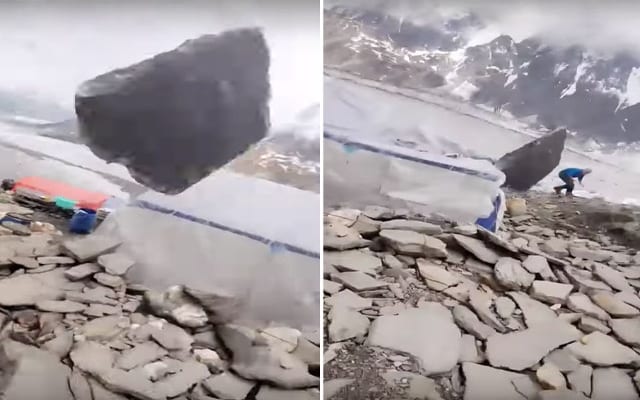 The following video shows a gigantic disk-shaped boulder swiping out the top of a tent prior to missing a mountain climber by mere inches. A MUST watch!

Now we’re not saying Apollo obviously does not want the man climbing this (particular) mountain, however we do know how to take a hint!

Perhaps, the mountain climbers were getting a bit too close to Yeti’s cave? Well – we’re not going to totally rule it out.

The mountain climber apparently has karma issues to resolve, but it’s not ‘that bad’ evidently because the boulder didn’t steamroll his behind.

Mountaineering (or mountain climbing) is technically a sport, where persons climb mountains. It may involve scrambling, rock climbing, crossing glaciers, as well as hiking.

Heedless of the length of the trip ― which can range from a couple of hours to multi-day excursions ― mountain climbing is more physically demanding actually than hiking. Thereby, if efficient moves in your strength-training workouts is what you value, mountain climbing is an ideal fit. It’s a compound exercise, meaning the climbing works several joints and muscle groups concurrently. The steady up-motion targets your leg muscles and glutes, including your hamstrings and quadriceps.

And, of course (as you saw) mountaineering is very dangerous, more so due to climate change. Weather change increases the peril of falling rocks in the Alps and various other mountain regions, increasing the existent risks for mountain climbers.

Travel Tips from the World’s Most Dangerous Cities

Israel’s Iron Dome has protected the country against missile attacks for years. The Iron Dome in Israel is the biggest of its kind in the world. No other countries in the world use the same air defense system, meaning it is one of a kind. The tension between Israel and Gaza has been going on… END_OF_DOCUMENT_TOKEN_TO_BE_REPLACED

The world is devastated by the news that Britain’s Prince Philip, the Duke of Edinburgh, has died at the age of 99. Palace media confirms that the Duke has expired mid-day today, April 9th. The announcement did not contain any specifics on the cause of death. The United Kingdom will enter a state of national… END_OF_DOCUMENT_TOKEN_TO_BE_REPLACED

Who would have known that religious prophets would be among the most loyal supporters of former President Trump? In fact, it has been observed that the most conservative Christians may have been the right amount of push for Trump’s presidential win back in 2016. Since Trump’s election back in 2016, numerous self-proclaimed “prophets” have been… END_OF_DOCUMENT_TOKEN_TO_BE_REPLACED