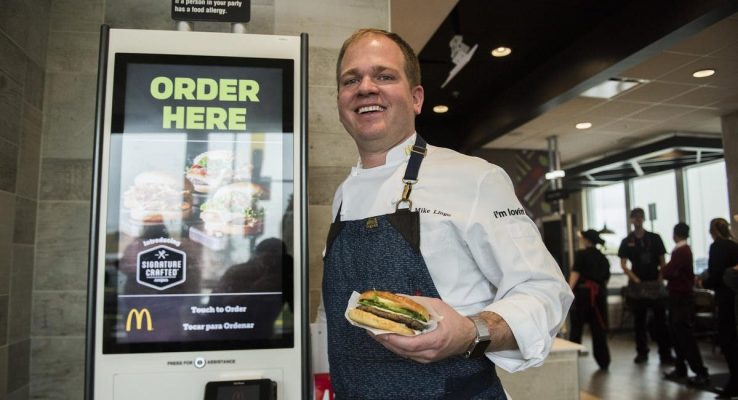 Our love for junk food has probably taken its toll on us all to a certain degree. This is more apparent the older you get. After all, junk foods are by no means a natural diet intended for human beings. Even worse, it’s not just junk foods themselves that are harmful, but the act of ordering them as well, as a recent study has found that McDonald’s touchscreen kiosks are full of shit. Literally.

“We were all surprised how much gut and faecal bacteria there was on the touchscreen machines. These cause the kind of infections that people pick up in hospitals. For instance, Enterococcus faecalis is part of the flora of gastrointestinal tracts of healthy humans and other mammals. It is notorious in hospitals for causing hospital-acquired infections,” according to a senior microbiologist of London Metropolitan University.

One kiosk was even found to have Staphylococcus which is a contagious toxic bacteria that can cause blood poisoning and the fatal septic shock. Even more disgusting is the fact that most people who use these kiosks are in a hurry and often do not wash their hands before eating their McDonald’s food.

After Work GIF from Dodgeball GIFs

Unfortunately, the same bacterias can be found on our very own touchscreen phone or tablet devices, but at least we do not eat food after being in contact with those… right?

Poo-tential Mas-turd-piece: Someone In Maine Makes Art Out Of Moose Poop

The Blood Test, The Swab Test, and The Saliva Test      Essentially, there are three general types of COVID-19 testing produced so far. One is the rapid test, the second is the saliva test and the other is the swab test. The rapid test (also known as the anti-body test) uses blood samples. The swab test… END_OF_DOCUMENT_TOKEN_TO_BE_REPLACED

The COVID-19 pandemic is one of the biggest modern pandemics known in history. Currently, there are more than five million confirmed cases in the world, with a total of 333,000 deaths. A total of 1.6 million of these confirmed cases are in the US alone. The world is currently in a race of finding a… END_OF_DOCUMENT_TOKEN_TO_BE_REPLACED

Despite concrete data and research, people’s opinions will always be diverse when it comes to a variety of topics including religion, politics, gender, and more. Denial is a common reaction to many important discussions and serious world events. The COVID-19 pandemic does not differ from any issues and is subject to opinions from critiques all… END_OF_DOCUMENT_TOKEN_TO_BE_REPLACED

Back in January, when the Wuhan, China coronavirus broke out, it didn’t make it to the front page of newspapers, in print or virtual form. Today, January feels like a lifetime away. Like it or not, people around the world have adapted to the new normal – staying at home, frequent hand washing, and social… END_OF_DOCUMENT_TOKEN_TO_BE_REPLACED

Since the beginning of the year 2020, the whole world has been stupefied by the rapid spread of a deadly coronavirus known as COVID-19. World superpowers in the West were unable to prevent the virus from reaching their borders. Because of this fact, the novel coronavirus COVID-19 became a world-wide pandemic no less than three… END_OF_DOCUMENT_TOKEN_TO_BE_REPLACED

For months since the start of 2020, the attention of the world has focused on immediate response efforts to contain and combat the novel coronavirus, also known as COVID-19. The deadly virus has pushed millions of people into isolation.  This kept people in their homes for weeks and months away from their work, their friends,… END_OF_DOCUMENT_TOKEN_TO_BE_REPLACED