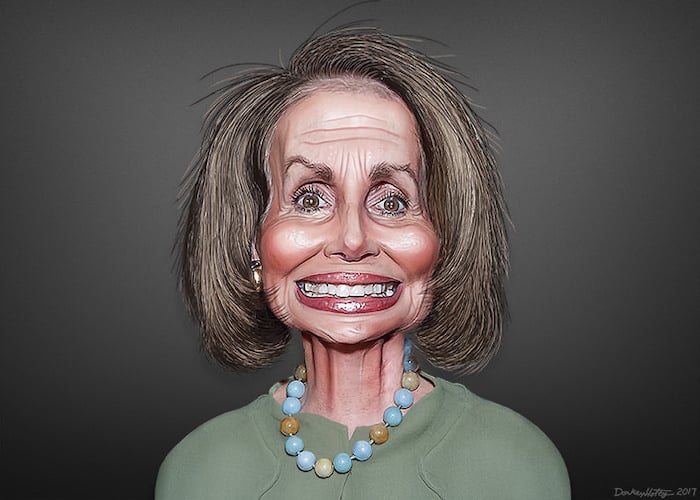 For one glorious moment, there was a unified purpose. Then, the next day, before the hangover had even worn off, it was back to party infighting, because if there’s one thing a Democrat loves more than one enemy to defeat, it’s shouting at people who basically believe the same thing as them.

The first topic on the agenda: the nomination for Speaker of the House. The Democrats had a real opportunity, here. As is historical tradition, they completely bungled it. That’s good for at least one person.

Let’s Hear It for Nancy … Or Not

So, it came as little surprise on Wednesday when the Democratic Party announced that the California representative was their official nomination for Speaker. And a collective yawn of outrage went out across the land.

In a year marked by political transition and the promise of fresh faces and new blood, seeing Nancy Pelosi propped up once more is a real bummer. Doubly so when you consider how close the controversial turd came to losing the honor.

There’s a Reason That Nobody Likes Nancy Pelosi

With the possible exception of Chuck Schumer, you’d be hard-pressed to find a Democrat more publicly reviled than Nancy Pelosi. She might be beloved in California’s 12th, but she doesn’t get much love outside her home territory. Defenders argue that the hatred comes from sexism, but that’s hot garbage. No one hates Nancy Pelosi because she’s a woman; people hate Elizabeth Warren because she’s a woman.

People hate Nancy Pelosi because she sucks. And because she’s part of an entrenched conspiracy to support MS-13 by allowing the free flow of illegal immigration. Think about it.

No, I’m screwing with you. Nancy Pelosi is just an awful human being.

GOP strategist Scott Jennings probably said it best. Nancy Pelosi is — in the minds of a lot of Americans — “the face of what everybody doesn’t like about Congress.”

As Speaker of the House and then Minority Leader in the House, Pelosi demonstrated an enthusiastic commitment to hardline partisanship, all while cementing her role at the top by surrounding herself with people whose greatest feat is making the Democratic Party look like a collection of smug hippies who couldn’t possibly give a shit about the folks on the other side of the aisle. They’re a walking-talking Michael Moore documentary.

That’s why Pelosi enjoys a national favorability rating of around 30 percent (https://elections.huffingtonpost.com/pollster/nancy-pelosi-favorable-rating) on her best day. And yet, she keeps failing upward. Who else pictures her conspiring behind the scenes like Kevin Spacey in House of Cards? Sure, that sounds dumb, but it’s the only explanation for her nomination for the Speaker position.

A Landslide That Was Really a Squeaker

When the numbers came down, less than thirty Democrats remained opposed to Nancy Pelosi’s nomination. Considering that 203 votes came down in her favor, Pelosi’s appointment reads like an overwhelming defeat. That wasn’t always the case.

Early in Pelosi’s campaign, sixteen Democratic representatives issued a letter in which they vowed to block her nomination. The letter gave voice to a previously (kind of) silent vein of the Democratic Party that resented Pelosi’s shady way of getting the job done. In addition to the increasingly vocal opposition, Pelosi faced real competition in the form of long-term Rep. Marcia Fudge.

The Ohio Representative was open about the need for change at the top of the Party, and she looked resolved to do something about it. For one brief moment, it looked like the tide was turning against Pelosi. Then, the final midterm election numbers rolled in; in the House, the Democrats had won big. Real big.

Suddenly sixteen reps weren’t such a big threat to Pelosi’s power. She could just let the new faces drown out any dissent among the ranks. That just left the removal of Marcia Fudge. Sadly, that turned out to be a much easier chore than it initially seemed.

Amid all this internal turmoil, Nancy Pelosi remained committed to helping voters. On November 21, she announced that she was starting a fancy new House subcommittee with the sole purpose ensuring that every American has the right to vote. Guess who Nancy chose to head up this all-important subcommittee? One Marcia Fudge.

Suddenly, Fudge’s darkhorse status in the campaign for Speaker dissolved into mist. Rep. Fudge released a statement the same day she got the subcommittee job that said, “I now join my colleagues in support of the leadership team of Pelosi, Hoyer, and Clyburn.”

Pelosi came out of the whole shebang down one opponent and with a handful of public support for pretending to be committed to voter’s rights. From a political standpoint, it’s kind of brilliant. It’s when you bring ethics in that things get messy.

If you didn’t realize why people really detest Nancy Pelosi on both sides of the aisle, the rep’s quest to recapture her position as Speaker of the House is an absolutely perfect example. It plays like one of the less interesting episodes of The West Wing. Of course, Jed Bartlett would have never put up with that kind of behavior.

Rather than address the division in her party, Nancy Pelosi let sheer numbers smash the opposition before bribing her only competition with a made-up bureaucratic position.

She may not be as overtly obnoxious as Donald Trump, but the result is the same. Pelosi is using political bullshit to quell open and honest conversation within her Party. An influx of fresh faces hasn’t managed to do much (yet) to change the part of the Democratic Party that doesn’t work: the leadership.

You Won’t Believe Why These Politicians Received Death Threats

The world is devastated by the news that Britain’s Prince Philip, the Duke of Edinburgh, has died at the age of 99. Palace media confirms that the Duke has expired mid-day today, April 9th. The announcement did not contain any specifics on the cause of death. The United Kingdom will enter a state of national… END_OF_DOCUMENT_TOKEN_TO_BE_REPLACED

Who would have known that religious prophets would be among the most loyal supporters of former President Trump? In fact, it has been observed that the most conservative Christians may have been the right amount of push for Trump’s presidential win back in 2016. Since Trump’s election back in 2016, numerous self-proclaimed “prophets” have been… END_OF_DOCUMENT_TOKEN_TO_BE_REPLACED

President Biden falls and slips multiple times on the Airforce One Steps and PEOPLE ARE GOING CRAZY! What’s the big deal? Some people are hating, while others are making memes just for the fun of it. We are all human, aren’t we? Everyone’s expected to stumble some time in their lives. However, with the internet… END_OF_DOCUMENT_TOKEN_TO_BE_REPLACED