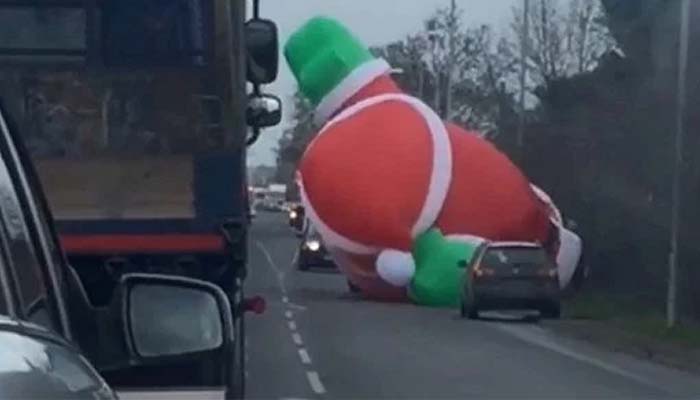 It seems Christmas comes earlier every year, and apparently, so does Santa.

An inflatable Santa caused anarchy on the roads in Cambridgeshire, UK, after coming free from his moorings.

The blow-up Santa escaped from a garden and ran riot on the B198 Cromwell Road near the market town of Wisbech.

The escapee blocked both lanes for two and a half hours and prevented unhappy drivers from getting home. So much for spreading the Christmas spirit!

Playing down the hilarity of the situation, the official traffic alert read: “Partially blocked and slow traffic due to a large inflatable Santa on road on B198 Cromwell Road both ways in Wisbech.”

The runaway St Nick was caught on camera during his rampage by dad-of-three Muhammead Fareed, who was stuck in the queue of traffic during the incident.

The 29-year-old taxi driver said: “I saw it wobble and then come down on to the road – it did raise a smile.”

He also added that two men were attempting to pull the fallen Santa off the carriageway as he came upon the scene.

“The road was blocked from both sides. I was shocked about what was going on.

“A car put on his hazards lights and two guys came out and tried to puncture it and take it off the road.

“But it was really really big so hard to move. It was massive, bigger than my seven-seater car.”

We hope this incident doesn’t affect his ability to deliver presents this year.

Christmas Ornaments That Do Not Belong On Anybody’s Xmas Tree

Seems it was just like yesterday when we all fought over and hoarded HEAPS of toilet paper for no reason at all. All the memories are rushing in as the US suffers from a gas shortage. As expected, gas shortage memes are everywhere to bring light to our currently sad situation. Along the US east… END_OF_DOCUMENT_TOKEN_TO_BE_REPLACED

Israel’s Iron Dome has protected the country against missile attacks for years. The Iron Dome in Israel is the biggest of its kind in the world. No other countries in the world use the same air defense system, meaning it is one of a kind. The tension between Israel and Gaza has been going on… END_OF_DOCUMENT_TOKEN_TO_BE_REPLACED

The world is devastated by the news that Britain’s Prince Philip, the Duke of Edinburgh, has died at the age of 99. Palace media confirms that the Duke has expired mid-day today, April 9th. The announcement did not contain any specifics on the cause of death. The United Kingdom will enter a state of national… END_OF_DOCUMENT_TOKEN_TO_BE_REPLACED