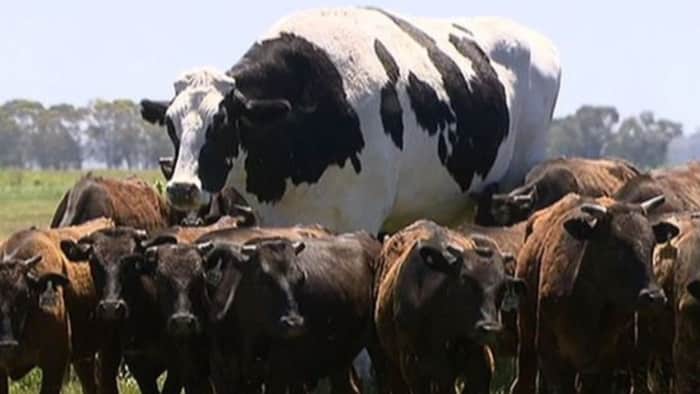 A colossal cow dubbed ‘Knickers’ has been saved by Australian farmers, who contend he is just ‘way too big’ to kill.

Okay – no one enjoys being judged due to how they look or how big they are, but it may have just saved the life of one animal who was scheduled for the slaughterhouse.

Knickers, standing at 6 feet 4 inches tall – the same height as many NBA players – and weighing roughly 3,100 lbs (uh yeah, that’s the same as a Mack Truck Model AB) – is said to be ‘too large’ to slaughter, and judging from the below footage they were not fibbing.

Video released by Australian media demonstrates the gentle giant meandering around with the rest of the herd, which he pillars above.

Owner Geoff Pearson stated: “It was too heavy. I wouldn’t be able to put it through a processing facility. So, I think it will just live happily ever after.”

Pearson informed reporters that he initially purchased Knickers for only $400, as a ‘steer’ that leads other cattle – known too as a ‘coach’ which is a castrated male cow.

He was always a standout steer from the others, a bit bigger than the rest,” Pearson furthered.

“When he was young, when we first got him, we had a Brahman steer [a breed of cattle] which was a friend of his.

“So his name was bra… so we [had] bra and knickers. We never thought he would turn into a big knickers.”

Seems it was just like yesterday when we all fought over and hoarded HEAPS of toilet paper for no reason at all. All the memories are rushing in as the US suffers from a gas shortage. As expected, gas shortage memes are everywhere to bring light to our currently sad situation. Along the US east… END_OF_DOCUMENT_TOKEN_TO_BE_REPLACED

Israel’s Iron Dome has protected the country against missile attacks for years. The Iron Dome in Israel is the biggest of its kind in the world. No other countries in the world use the same air defense system, meaning it is one of a kind. The tension between Israel and Gaza has been going on… END_OF_DOCUMENT_TOKEN_TO_BE_REPLACED

The world is devastated by the news that Britain’s Prince Philip, the Duke of Edinburgh, has died at the age of 99. Palace media confirms that the Duke has expired mid-day today, April 9th. The announcement did not contain any specifics on the cause of death. The United Kingdom will enter a state of national… END_OF_DOCUMENT_TOKEN_TO_BE_REPLACED