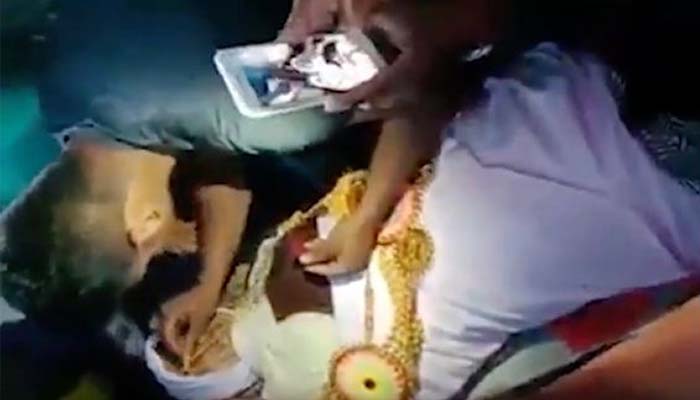 Well, this gives “’til death do us part” a new meaning. A man in India married his deceased fiancée and vowed to remain single for the rest of his life.

A heartbreaking video shows the devastated groom performing a wedding ceremony in front of fellow mourners.

Her grief-stricken mother can also be seen crying over her daughter’s body, as the boy adorns his dead lover with red powder as part of the marriage ritual.

The woman is said to have been killed in a bus accident in Tamil Nadu, India. The couple had been together for years  and were planning their wedding when the unthinkable happened.

So, the 24-year-old decided to wed the tragic bride anyway as a way to honor her memory. The footage was captured by one of the funeral attendees, and has since been shared extensively on social media.

Viewers have been touched by the man’s dedication to his sweetheart, with one commenting: “This is actual love and not what we see in the movies.”

While another said: “I want such a man in my life who can love me like this.”

Still, this isn’t the only tragic love story to recently go viral. In August a man in China married his dying fiancée, moments before she passed away from leukemia.

Israel’s Iron Dome has protected the country against missile attacks for years. The Iron Dome in Israel is the biggest of its kind in the world. No other countries in the world use the same air defense system, meaning it is one of a kind. The tension between Israel and Gaza has been going on… END_OF_DOCUMENT_TOKEN_TO_BE_REPLACED

The world is devastated by the news that Britain’s Prince Philip, the Duke of Edinburgh, has died at the age of 99. Palace media confirms that the Duke has expired mid-day today, April 9th. The announcement did not contain any specifics on the cause of death. The United Kingdom will enter a state of national… END_OF_DOCUMENT_TOKEN_TO_BE_REPLACED

Who would have known that religious prophets would be among the most loyal supporters of former President Trump? In fact, it has been observed that the most conservative Christians may have been the right amount of push for Trump’s presidential win back in 2016. Since Trump’s election back in 2016, numerous self-proclaimed “prophets” have been… END_OF_DOCUMENT_TOKEN_TO_BE_REPLACED