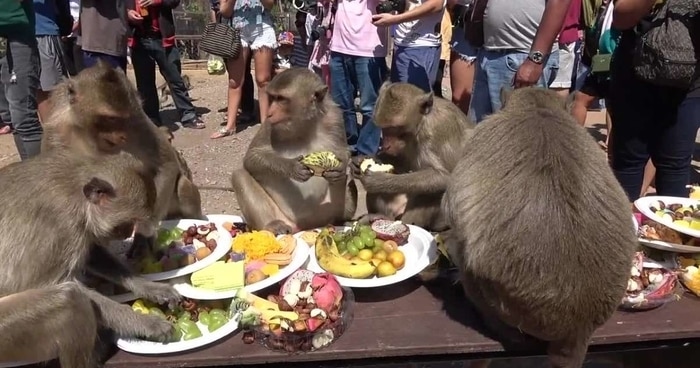 Every year, a Thai town hosts a birthday picnic for its population of wild monkeys; and, the celebration can get a bit out of paw—hand, we mean.

Tables of candy, fruit, juice and ice cream are laid out on tables throughout the day in Lopburi, Thailand.

The primates contested for the sweets, with larger creatures backing down the smaller ones. At a point, after they knocked off his hat one photographer had two animals balanced on his head. Some monkeys even leapt onto the heads of onlookers!

Several of the females, found themselves with monkeys tugging at their clothes and on their head pulling at their hair.

The Lopburi Monkey Party has become an annual attraction for locals and tourists across the central province.

The monkey is a symbol of good luck and that by commemorating them with a b-day party, in the year ahead they will receive good fortune, Buddhists believe.

There are presently 264 known monkey species.

Contrary to popular belief, apes, are (technically) not monkeys – just so you know.

The Monkey Mafia: They Steal Your Sh*t Then Make You Buy it Back (For Food)