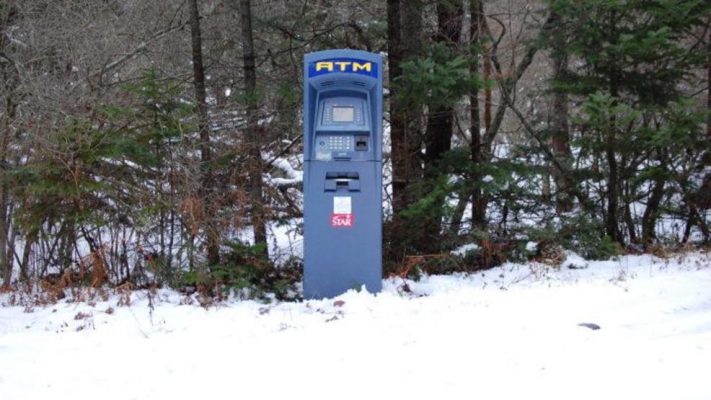 No matter how far science has gone, humans will always come across something that cannot be explained. Be it some Irish UFOs, inexplicable space debris, or a racist businessman becoming a president, our world has mysteries in spades. However, none of those weird things could prepare us for something out-of-this-world– a mysterious ATM (automated teller machine) in the middle of the woods.

Around seven in the morning in North Deer Isle, Maine, a woman went out for her usual morning walk in the snowy woods on November 20. However, nothing was usual during that morning, because she came across an ATM unit in the woods. The woman simply could not take chances, because it could have been stolen, so she reported the sighting to the Hancock County Sheriff’s Office.

The police were equally baffled at the thing. They also assumed that it must not have been stolen because it was empty and did not show any signs of forceful damage– too bad for some lumberjacks or hunters who are in need of a quick buck. So what was it? An art exhibit demonstrating the dichotomy of urban entities in a rural environment? Or was it aliens wanting to prank human beings?

Oh, it was a prank all right, just not from aliens, sadly. The police soon learned that it was from a woman who placed it there for giggles. Her name was never revealed by the police but they stated that she called them and that she found the ATM in a pile of trash. Needless to say, the police were not amused and wanted to the owner to dispose of the ATM unit properly.

ATM Repair Guy Gets Stuck, Slides Out Notes Through ATM For Help

The moment he was inaugurated, immediate changes made by Biden made headlines across the country. These are many of the controversial issues and topics that were shunned and ridiculed by the former administration. Americans can finally breathe a sigh of relief that these concerns have finally reached government policies. It seems clear that Biden has been… END_OF_DOCUMENT_TOKEN_TO_BE_REPLACED

Presidential pardons are one and many in the history of the US. There are many times when US Presidents granted reprieves for their citizen’s misdeeds. The US President may grant a pardon for any individual, including himself, for any crimes done against the country and its citizens. This issue of Presidential pardons has been trending… END_OF_DOCUMENT_TOKEN_TO_BE_REPLACED