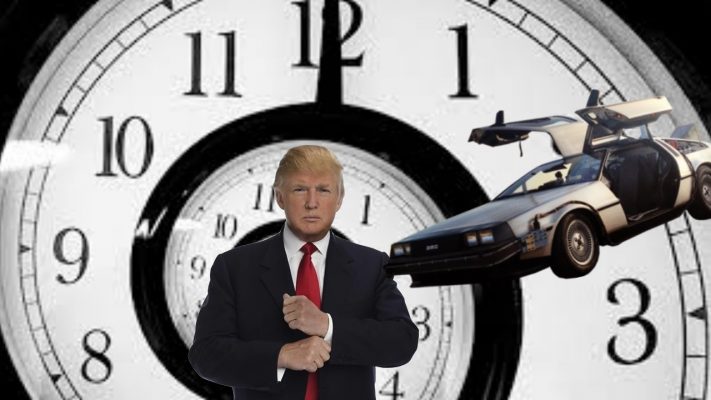 Ever since US President Donald Trump somehow won back in 2016, more or less half of the US and some parts of the world has been looking forward to one thing: the end of his term. Unless he runs for re-election, goodness forbid– a lot of us has been looking forward to the end of such a nightmare. Still, a “time traveler” might have all the answers as he claims to know who will be the next president.

A time traveler who calls himself Noah (sorry Whovians, not this time) has been making rounds on the internet lately. For he has claimed to know exactly what is going to happen in the White House. That is because he appears to be originally from the year 2030 and got stuck in our current timeline after traveling to the past last year.

Unfortunately, Noah claims to have seen it all and that Trump will win again in 2020. Even worse, Trump will stay in power up until 2028. If anything, Noah is more like a doomsday prophesizer than a time traveler.

However, soon after that period of political armageddon, Noah has claimed that a 21-year-old Yolanda Renee King (granddaughter of Martin Luther King) will win the office and replace Trump through some amendment which will lower the legal age of presidential candidates. The answers you seek are all compiled in a paranormal YouTube channel which takes itself too seriously.

Additionally, Noah has also claimed that aliens would also be present in 2030… as in, extraterrestrial life outside of Earth, not the ones the Trump administration has been violently keeping out of the US border. Regrettably, no one asked Noah the most important questions during the interview: what the hell is he on and where do we get some?

All Aboard The Regret Train: This Guy Bet $3,000+ And A Tattoo On Croatia Winning The World Cup

The Blood Test, The Swab Test, and The Saliva Test      Essentially, there are three general types of COVID-19 testing produced so far. One is the rapid test, the second is the saliva test and the other is the swab test. The rapid test (also known as the anti-body test) uses blood samples. The swab test… END_OF_DOCUMENT_TOKEN_TO_BE_REPLACED

The COVID-19 pandemic is one of the biggest modern pandemics known in history. Currently, there are more than five million confirmed cases in the world, with a total of 333,000 deaths. A total of 1.6 million of these confirmed cases are in the US alone. The world is currently in a race of finding a… END_OF_DOCUMENT_TOKEN_TO_BE_REPLACED

Despite concrete data and research, people’s opinions will always be diverse when it comes to a variety of topics including religion, politics, gender, and more. Denial is a common reaction to many important discussions and serious world events. The COVID-19 pandemic does not differ from any issues and is subject to opinions from critiques all… END_OF_DOCUMENT_TOKEN_TO_BE_REPLACED

Back in January, when the Wuhan, China coronavirus broke out, it didn’t make it to the front page of newspapers, in print or virtual form. Today, January feels like a lifetime away. Like it or not, people around the world have adapted to the new normal – staying at home, frequent hand washing, and social… END_OF_DOCUMENT_TOKEN_TO_BE_REPLACED

Since the beginning of the year 2020, the whole world has been stupefied by the rapid spread of a deadly coronavirus known as COVID-19. World superpowers in the West were unable to prevent the virus from reaching their borders. Because of this fact, the novel coronavirus COVID-19 became a world-wide pandemic no less than three… END_OF_DOCUMENT_TOKEN_TO_BE_REPLACED

For months since the start of 2020, the attention of the world has focused on immediate response efforts to contain and combat the novel coronavirus, also known as COVID-19. The deadly virus has pushed millions of people into isolation.  This kept people in their homes for weeks and months away from their work, their friends,… END_OF_DOCUMENT_TOKEN_TO_BE_REPLACED