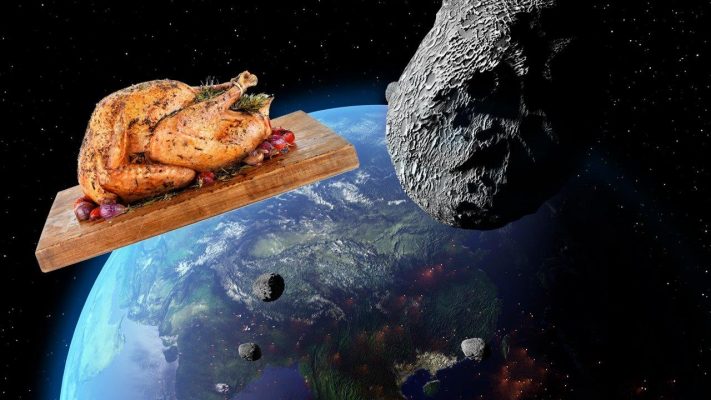 Every year, Thanksgiving is the same on Earth, roast turkey which your parents died to prepare, clashing political views at the dinner table, and of course, something to be thankful for, whatever that is. Do not take that for granted, however, as some people have arguably more “distant” and “cold” Thanksgiving celebrations such as the astronauts of the International Space Station (ISS).

Distant, literally, because they are situated 260 miles above the Earth with just sheets of metal to protect them from the cold, dark void of space. It’s one thing to have Thanksgiving with politically opposed relatives but that does not compare to dining under the ever-looming threat of space accidents. Hence, the astronauts of US, Germany, and Russia had quite a special Thanksgiving in space:

Are you thawing out your turkey? The space station crew is preparing for Thanksgiving, too! Tomorrow, an American, European and Russian will celebrate together in space with their own special meal. Happy Thanksgiving from the International Space Station! pic.twitter.com/VVW5QEEvKY

That’s one hell of a literal out-of-this-world Thanksgiving. Their turkey does look a bit light on the stomach though with the way it floats… Just kidding, it was the lack of gravity. Anyway, their Thanksgiving feast apparently consists of “candied yams, to stuffing, to special spicy pound cakes,” unfortunately they do not seem to have real turkey because that would not be practical nor safe.

Those packs do not compare to the Thanksgiving feasts on Earth, though because they are in ready-to-eat packets that are sealed and processed with heat. They do that to prevent germs from contaminating and traveling into space. In a way, one could say that they are lucky since their food is guaranteed germ-free and their company at the dinner table would not be arguing in any way, hopefully.

Concert In Space; The Final Frontier? Watch As Astronaut From The ISS Makes Music In Space

The Blood Test, The Swab Test, and The Saliva Test      Essentially, there are three general types of COVID-19 testing produced so far. One is the rapid test, the second is the saliva test and the other is the swab test. The rapid test (also known as the anti-body test) uses blood samples. The swab test… END_OF_DOCUMENT_TOKEN_TO_BE_REPLACED

The COVID-19 pandemic is one of the biggest modern pandemics known in history. Currently, there are more than five million confirmed cases in the world, with a total of 333,000 deaths. A total of 1.6 million of these confirmed cases are in the US alone. The world is currently in a race of finding a… END_OF_DOCUMENT_TOKEN_TO_BE_REPLACED

Despite concrete data and research, people’s opinions will always be diverse when it comes to a variety of topics including religion, politics, gender, and more. Denial is a common reaction to many important discussions and serious world events. The COVID-19 pandemic does not differ from any issues and is subject to opinions from critiques all… END_OF_DOCUMENT_TOKEN_TO_BE_REPLACED

Back in January, when the Wuhan, China coronavirus broke out, it didn’t make it to the front page of newspapers, in print or virtual form. Today, January feels like a lifetime away. Like it or not, people around the world have adapted to the new normal – staying at home, frequent hand washing, and social… END_OF_DOCUMENT_TOKEN_TO_BE_REPLACED

Since the beginning of the year 2020, the whole world has been stupefied by the rapid spread of a deadly coronavirus known as COVID-19. World superpowers in the West were unable to prevent the virus from reaching their borders. Because of this fact, the novel coronavirus COVID-19 became a world-wide pandemic no less than three… END_OF_DOCUMENT_TOKEN_TO_BE_REPLACED

For months since the start of 2020, the attention of the world has focused on immediate response efforts to contain and combat the novel coronavirus, also known as COVID-19. The deadly virus has pushed millions of people into isolation.  This kept people in their homes for weeks and months away from their work, their friends,… END_OF_DOCUMENT_TOKEN_TO_BE_REPLACED