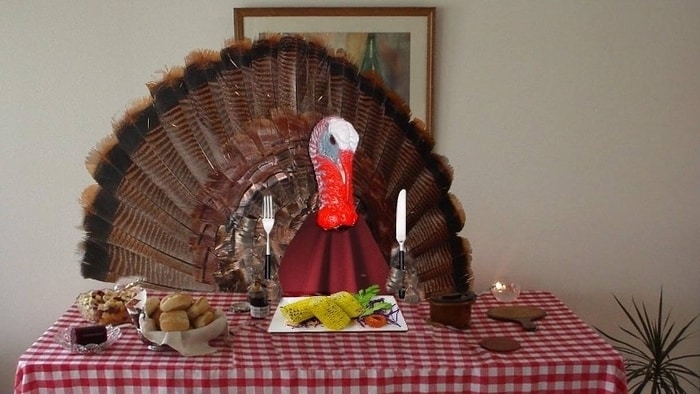 Typically – we eat the turkey. However, a rescued turkey and his fellow genus Meleagris’ are eating better this Thanksgiving than some humans.

Since William Bradford penned of how the colonists had hunted wild turkeys during the fall of 1621, and since turkey is an unambiguously North American (and delectable) bird, the turkey gained momentum as the Thanksgiving meal of choice for Americans in 1863 after Abraham Lincoln declared Thanksgiving a national holiday.

When Bradford’s writings were reprinted in 1856 after being lost for one hundred years, they found an amenable audience with advocates who desired Thanksgiving be commemorated. Turkeys just made sense, as far as the holiday’s main course because they’re large enough that they can feed a table full of famished family members!

Plus, unlike cows or chickens, they did not serve much serviceable purpose like making milk or laying eggs. And unlike pork, turkey wasn’t so general that it seemed like an unfit selection for a special occasion, either.

Hell even Alexander Hamilton, once asserted that, “No citizen of the United States shall refrain from turkey on Thanksgiving Day.”

Though in the above video, a rescued turkey is not trying to hear all that! This propitious turkey and his comrades are living their best life – prancing around the farm, getting fresh air, mingling, and eating actual Thanksgiving supper on Thanksgiving. Now, how freckin’ awesome is that!

We are very happy for these birds. Not just because they’re safe and sound on this holiday (rather than slayed, plucked, washed, stuck in the oven, flamed then ripped apart limb-by-limb and devoured by some stinky humans), but they’ve already had a rough enough life as it is and now they deserve to live tranquilly free in (bliss and) harmony.

The Unspoken Disturbing Truth Of Thanksgiving

A Beginners Guide to Thanksgiving With a Politically Divided Family