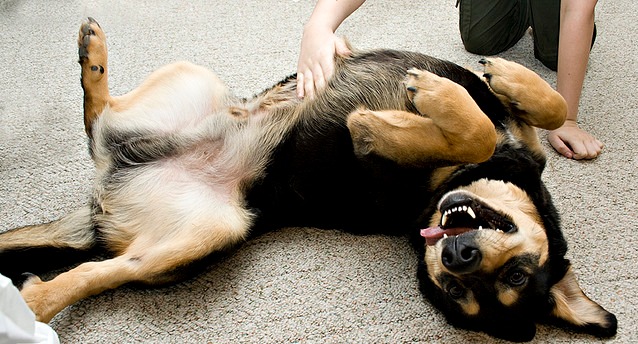 There is no doubt that some animals, particularly dogs, are more clever than the rest. There have been numerous videos and photos around the internet showing just how resourceful these pups are, especially if they have to fend for themselves. One stray dog in Turkey has learned of something that she probably will not want to share with her kind. For she has learned the secret of getting some rubs for free!

A stray dog named Linda who lives in the streets of the Izmir province in Turkey has gone viral recently. Linda, who appears to be a German Shepherd mix, can be seen visiting a car wash nearly every day, that in itself is enough to make humans curious. Now, what would a dog want with a car wash anyway? Turns out, Linda has been using the automated car wash scrubs for her own R&R, take a look:

Linda, a stray dog in Turkey, comes to the same car wash a couple times a week to use the automatic petting machine.

It seems Linda has devised a way to get free unlimited back rubs without the help of some humans beings. Of course, being a stray dog, one would assume that not many people give Linda her much needed pets and back rubs, so she had to get resourceful. It also seems that Linda has known how it works for a while now since she knows when to position herself for maximum rubs.

Because of the video though, Linda might have become less lonely, as she has become quite popular in the said place and people are expecting her every day at the said gas station car wash for her daily automated back rubs and pets.

Doggie Treats: You Can Now Invite Some Shelter Dogs Over For Thanksgiving

Together with the fireworks for the Independence Day weekend, the latest explosive Hollywood news involves no one else but the controversial Kanye West. The famous celebrity has revealed his plans for a presidential run. Originally planned for 2024, he has stated that he is actually going to run for the 2020 Presidential elections in November. The… END_OF_DOCUMENT_TOKEN_TO_BE_REPLACED

Recent trends have reported that K-pop fans in the US are getting mixed in with current issues in politics. K-pop fan communities are using online platforms to rally up and protest against racism in the United States. In support of the #BlackLivesMatter movement, the online K-pop community has come together in protest. Never has it… END_OF_DOCUMENT_TOKEN_TO_BE_REPLACED