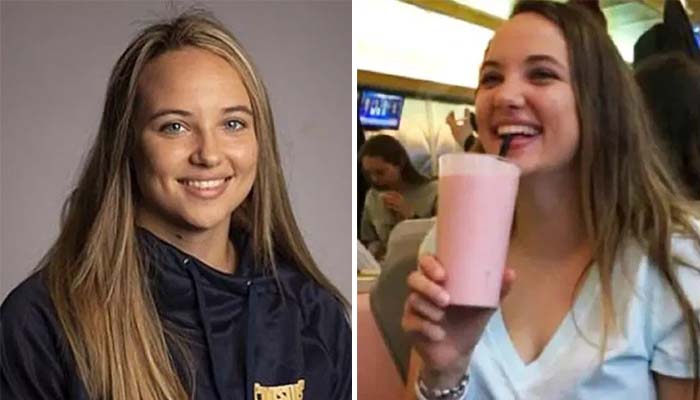 A teenager whose parents disowned her for being gay can continue her college dreams thanks to the kindness of strangers.

Emily Schleck’s parents threw all of her treasured childhood items out of their house, including her stuffed animals, photographs and awards, after finding a photo of the teen with her girlfriend Justyna.

The 19-year-old, from Webster in New York, also received a text from her mom informing her she would be cut out of their lives if she didn’t agree to quit college and undergo conversion therapy.

But Schleck, who is attends Cansius College in Buffalo, refused to give up her education or keep her sexual preference a secret any longer. Unfortunately, choosing to stand up for herself left Schleck broke and homeless.

The star athlete came home to find all of her beloved childhood memories loaded into her car. The license plates had also been removed from the vehicle, with her father refusing to pay the insurance after discovering his daughter’s sexuality.

The pair also left a note saying they wanted nothing more to do with her.

Knowing her pal had just $20 to her name, a friend set up a GoFundMe page for Schleck, which has raised over $100,000 for the teen.

The page reads: “Her parent’s response has put a lot of emotional weight on Emily.

“Luckily, she was already moved into her dorm when Emily’s parents found out.

“Her parents responded with hate: aggressive texts blaming her and they even dumped of all her stuff she had left at home such as baby pictures, old clothes, childhood toys, etc. into the trunk of her car.”

Schleck works two jobs to survive and still competes for her college. Until now, the National Collegiate Athletic Association banned students from accepting donations, but after hearing of Schleck’s predictment, they changed the rules so she could use the GoFundMe money to support herself.

In response to the outpouring of support, Schleck said in a statement: “Thank you to everyone who showed their love and support in this difficult time.

“The positive outreach has been unbelievable. I never expected this amount of support.”

GOP Decide It’s OK To Refuse LGBTQ Couples Adoptions, Even For Those Kids Caged By ICE

Together with the fireworks for the Independence Day weekend, the latest explosive Hollywood news involves no one else but the controversial Kanye West. The famous celebrity has revealed his plans for a presidential run. Originally planned for 2024, he has stated that he is actually going to run for the 2020 Presidential elections in November. The… END_OF_DOCUMENT_TOKEN_TO_BE_REPLACED

Recent trends have reported that K-pop fans in the US are getting mixed in with current issues in politics. K-pop fan communities are using online platforms to rally up and protest against racism in the United States. In support of the #BlackLivesMatter movement, the online K-pop community has come together in protest. Never has it… END_OF_DOCUMENT_TOKEN_TO_BE_REPLACED