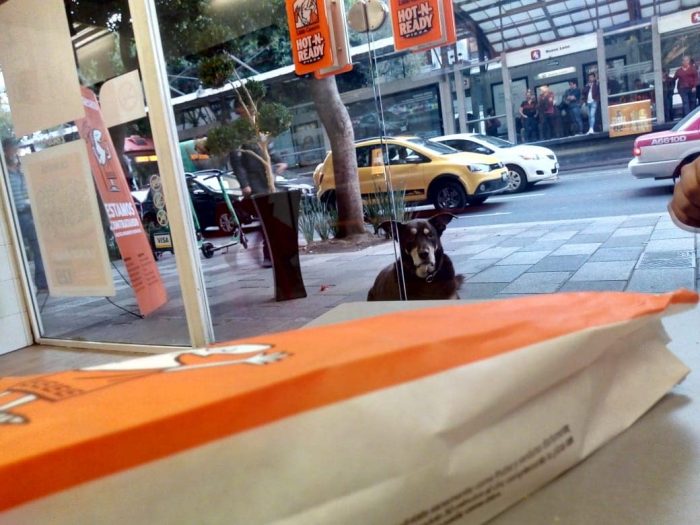 There is no denying the fact that dogs will do anything for food– even if they are well-fed. In fact, dogs have been known to even resort to uh, “criminal” bad boy activities just get some human foods which they covet so much. Whether is it McDonald’s cheeseburgers or chicken wings, no human food is safe. However, one dog wanted to up his game and tried to scam people in front of a pizza shop.

It happened in one Little Caesar’s pizza shop in Mexico City, Mexico after a woman named Estrella went there for a meal. While she was eating, something caught her attention. A dog was lying outside the glass door of the pizza shop making a sad face and looking directly at her. The dog even looked like a stray from the way he begged as if the cold and unforgiving concrete jungle is starving him every day:

There was one thing that looked off for the seemingly stray doggo, for he had a thick waistline– an odd physique for a stray. Nevertheless, Estrella went up to him with every intention of helping the poor pup. However, Estrella, it seemed, has been bamboozled. Upon a closer inspection, she found the dog was wearing a collar, more than that, the collar has a keychain with an inscription:

Anyone who can read and speak Spanish knew what it meant, “Don’t give me pizza. Thanks.” That only meant that the said dog has a habit of scamming pizza shop customers and his owner knows it. Needless to say, the sly dog got busted and he will get a Caesar Milan treatment instead of a Little Caesar’s treat.

Klepto Dog Keeps Stealing Stuff To Ransom Them For Treats

Just this week, lawmakers approved a bill establishing the District of Columbia (D.C.) as the 51st state of the United States of America. This is after multiple calls and protests from the citizens to finally consider D.C. as a state.  However, the bill is not out of the woods yet as it faces multiple oppositions… END_OF_DOCUMENT_TOKEN_TO_BE_REPLACED

John Bolton’s new book entitled ‘The Room Where it Happened’ had been stirring up quite the attention since it was announced for release last week. Officially released only June 23, the new book seems to threaten the Trump administration as there had been moves to get it unpublished. The request was later on turned down… END_OF_DOCUMENT_TOKEN_TO_BE_REPLACED

Learning about the Juneteenth Holiday The Juneteenth holiday, celebrated every 19th of June, is a commemoration of the liberation of enslaved African-Americans in the United States. It was on the 19th of June 1865 when Union Army General Gordon Granger announced General Order No. 3 in Galveston, Texas officially emancipating slaves in the entire state.… END_OF_DOCUMENT_TOKEN_TO_BE_REPLACED