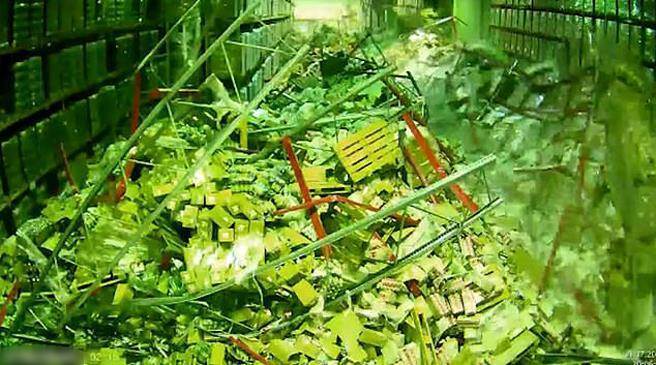 This is warehouse security cam footage of a sloppy forklift driver inducing a chain reaction that knocks down shelf after shelf, dumping goods into a monolithic pile on the floor.

Below, is the traumatizing moment a forklift operator caused a whole warehouse of goods to fall dominoes style when he inadvertently bumped into a shelving unit.

Filmed inside an unspecified distribution warehouse, the clip, nabbed the driver as he migrated his way down an aisle between two tall pallet racks. Two employees stood at the foot of the aisle inspecting boxes as he slowly transited between the shelves, but calamity struck as he reached them.

It remains unclear the condition of the driver following the accident.

However it has left viewers speculating how in the h-e-double-hockey-sticks this could have happened, and whether the driver got fired or not (we assume, definitely)!

One vid viewer said: ‘Clean up on aisle 6… 7… 8…’ Another stated: ‘Roll of paper towels, dust mop and pan, and as good as new to me.’ A third suggested the issue must be with the tenuous shelving, and not the actual operator. He explained: ‘If that’s all it took to bring down 3/4 of the warehouse, then the problem lies in the shelving, not the worker.’ Another merely commented: ‘Lunch break.’

SO, That’s How You Catch Piranha [Video]