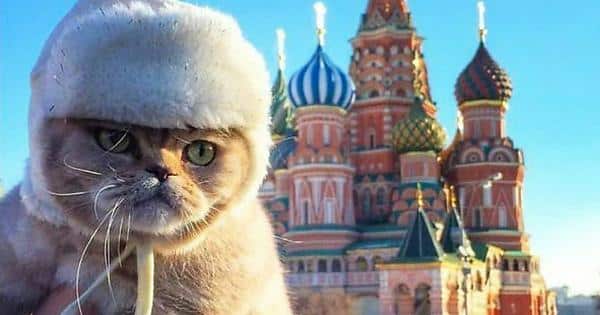 Sometimes the real reason cats are so snobbish, apart from generally hating humans, is that they are connoisseurs of art. This has been proven recently when two of them kept trying to gain entry to a museum in Japan after being shooed away. Well, now they can finally flex their elitist taste for culture in Russia since the so-called “cat city” there has invited them over.

Back in early November, Japanese Twitter went abuzz with a viral video of two cats named Gosaku and Ken-Chan who tried to enter the Hiroshima Onomichi City Museum of Art in Japan. The security guard simply won’t let them, but some human being with a nerve to stop them is not enough to, well, stop them. So they kept trying:

A museum in Japan spends most of its day refusing entry to 2 cats trying to get in @bijutsu1 pic.twitter.com/WK4M3Y51hc

This gained the attention of the city of Zelenogradsk, Russia. The city has gained the reputation of being the ‘cat city’ because it houses the Murarium Art Collection of Cats. There, Gosaku and Ken-Chan could have their lust for cat art sated without being refused entry by some mere human. Additionally, Zelenogradsk is also set to celebrate its local holiday about cats in March hence the invitation.

Dear Ken and Go, we invite you to birthday of a Zelenogradsk cat. Zelenogradsk – a city where cats love, on th shore of the Baltic sea. We have a special museum about cats – you’ll love it there! @bijutsu1 we are waiting for you! https://t.co/YLHgsqM1oQ

Unfortunately, Onomichi City Museum of Art declined the said invitation, speaking on behalf of Gosaku and Ken-Chan themselves. Here’s the Japanese museum’s reply:

Zelenogradsk is a town with shores which is beautiful as well as Onomichi where we live in.
As a result of having repeated consideration, unfortunately, we decided to be not accepted your invitation.
Please give our best regards to cats and people living in Zelenogradsk. Ken & Go https://t.co/kXo3GWR1zM

The reasons were never clearly stated and the said two art-savvy cats might never get the chance to be with their own kind in cat city. Apparently, cats are also not exempted from the political tension between Russia and Japan, apart from other reasons, perhaps.

Gift-giving isn’t just a seasonal affair between friends, families and acquaintances. The art of gift-giving is also conducted on a national scale with countries often sending each other big, weird and expensive gifts. Experts in all things gifts, Vanilla Reindeer put together some examples of these expensive and odd gifts that have been shared between… END_OF_DOCUMENT_TOKEN_TO_BE_REPLACED

There are lots of ways you can make Pres. Trump feel welcome: you can offer him coffee, or mow a penis into a field for him to view as his plane lands. The willie in question has been chopped by Born Eco ahead of the arrival of President Trump, who visited the UK Monday for… END_OF_DOCUMENT_TOKEN_TO_BE_REPLACED

The year isn’t even halfway over, yet Donald Trump has managed to make a fool of himself and our country countless times. From inviting the national college football champions, the Clemson Tigers, all the way to the White House for some McDonald’s to his to the dreaded results of Mueller’s investigation, it has been one… END_OF_DOCUMENT_TOKEN_TO_BE_REPLACED

Republicans have always said that when they gained control in Congress, they would work to overturn Roe v. Wade and here they are, cashing in on that promise one state at a time. So far, Alabama, Arkansas, Georgia, Kentucky, Missouri, and Ohio have all passed incredibly restrictive laws on abortions, making it illegal for women… END_OF_DOCUMENT_TOKEN_TO_BE_REPLACED

If you’re on Snapchat, then you’ve probably played around with (and were likely horrified by) their filter gender swap filters. While you’re probably using these filters to send hilarious pics to your friends, some guys using them to create Tinder profiles. What likely started out as a joke has quickly evolved, and these guys are… END_OF_DOCUMENT_TOKEN_TO_BE_REPLACED

“Milkshaking” is a hilarious trend in Britain where a milkshake is thrown at and ideally lands on a far-right politician or activist. The point of this nonviolence protest is to humiliate them without causing injury. Physical injury at least. There’s no doubt that milkshaking has led to a few bruised egos. Not only is this… END_OF_DOCUMENT_TOKEN_TO_BE_REPLACED