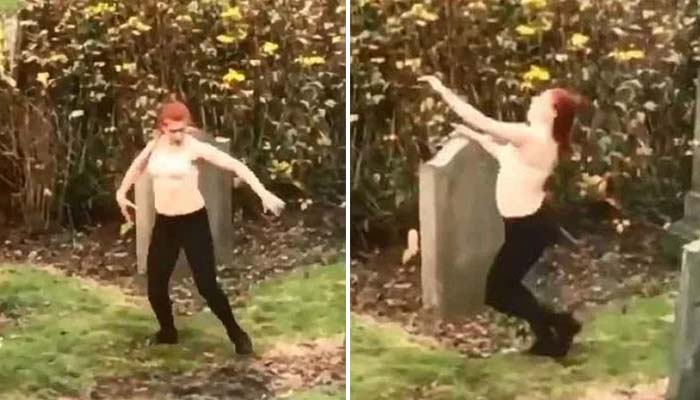 What is it with people and doing weird things in cemeterys? If it’s not drunk men getting arrested for pretending to be ghosts, it’s art students dancing around half naked.

Confused? So is the rest of the internet by this video of a woman dancing in a graveyard. But contrary to rumors that she was trying to raise the dead, it turns out Anna Ottorbeck was just “impersonating the wind and trees.”

The 22-year-old student from the Scottish School of Contemporary Dance choreographed the unique performance at Howff Burial Ground, Dundee, as part of her studies.

“We’ve been filming here for a while, but last time no one really noticed us,” she explained.

“Now we have lots of people looking – passers-by are shouting out and the residents in the flats above were laughing.”

I’ve heard folk say “will you dance on my grave”, well this is it in action.

And after someone uploaded footage of the performance to social media, it swiftly went viral.

The video shows Anna waving her arms and body around wildly amongst the gravestones, while wearing black leggings and a nude bra.

But the public’s reaction to her unusual routine hasn’t deterred her from performing.

“It doesn’t bother me at all,” she continued.

“I want to be a contemporary dancer so I’m not self-conscious about dancing in public, or my body.”

You do you, Anna.