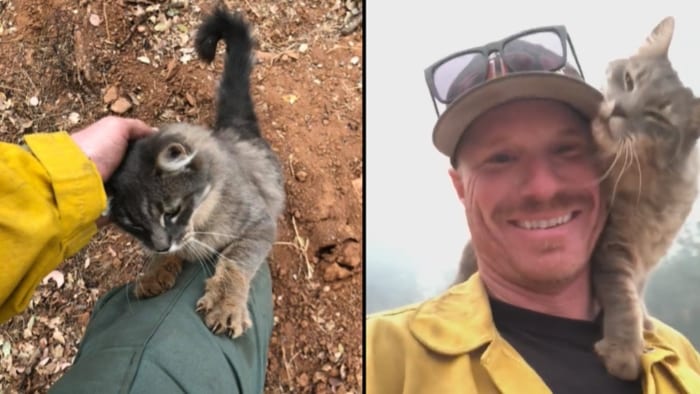 A firefighter who saved a cat from a California wildfire has gone viral after photos of him and his new four-legged amigo were shared on the web.

Fairview Valley Fire Department Engine Captain, Ryan Coleman, shared a clip of himself with the feline refusing to let go of him after he rescued her near the lethal Paradise wildfires site.

In spite of bringing the cat to safety, Ryan stressed that she clung on anyway. Precious? Indeed. But pragmatic? Uh, not really.

Ryan had to complete the rest of his job with the kitty still hanging on to him. In the footage, he can be heard stating: “Let’s go for a walk. Where are we going? We’re walking around.”

Alongside his video in caption, Ryan wrote: “Kitty rescue. She just chilled on my neck and shoulders as I’d walk around.” In the vid the cat appears downright delighted to be kicking it with Ryan, kneading at him with her little paws and rubbing her face against his.

Very adorable, much. The footage has piled up thousands of viewers already, with many commenters suggesting to Ryan he should take the cat on as a pet if no owners claim it as she ‘clearly loves’ him. Though, to one such comment he replied: “I wish. I’m still out here.”

Sharing a post about the fires just a few days before his cat video, Ryan penned: “On scene of the Camp Fire and starting shift #1. My heart and prayers go out to the more than 2,000 families that lost their homes and all the people that lost loved ones. Hoping for the safety of my crew and fellow firefighters. I’m excited to be here helping out, and I’m ready to get started doing what we do!”