We might still have to wait a few more months before we get to enjoy the final season of Game of Thrones, but who needs to see the destruction of the world on television in the form of entertainment when we can just watch it all go down in real life? With King Joff…I mean Donald Trump ruling the United States, we can only hope that the inevitable destruction he will bring to us all is put off long enough for us to see the conclusion of the show. While we wait for the conclusion of Game of Thrones to air, here are some political memes inspired by the show. 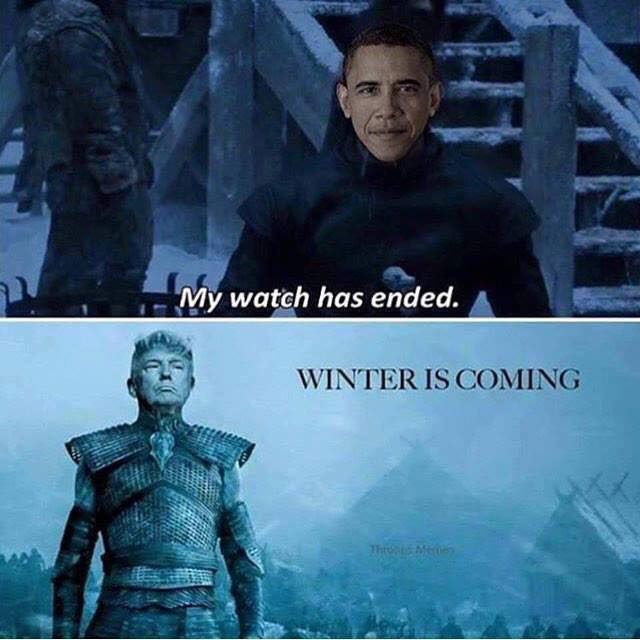 When former President Barack Obama finished his second term in office, most of the world held its breath as Donald Trump was sworn in as our new not-so-humble leader. To say that he’s comparable to the Night King is putting things lightly, as we’ve yet to see what the Night King in Game of Thrones is fully capable of. While Trump, on the other hand, has proven time and time again what a moron he is. 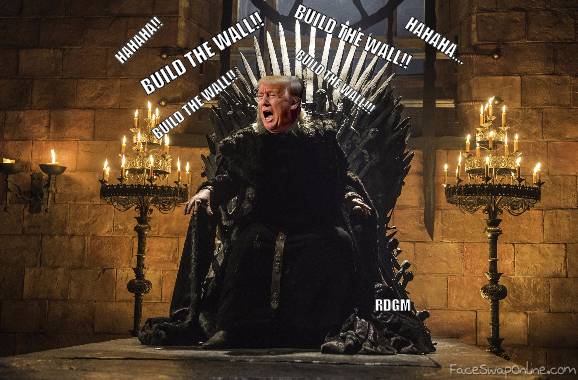 Even though Trump doesn’t actually sit on the iron throne, he definitely does sit on a similar structure in his mind. While this meme depicts most of our nightmares, it’s probably a regular fantasy for him. Who wouldn’t want to sit on a throne of iron swords commanding their minions to do your work?

Nothing gets Trump’s fans more hyped up than talking about who is going to pay for the border wall. While our president thinks the Mexican government will be picking up the tab on this ridiculous project of his, likely American taxpayers will be stuck with it. In the world of Game of Thrones, however, Alliser Trump would ask that the white walkers pay for the wall because, in his puny mind, Mexicans and the white walkers are one and the same.

4. If Trump Were The King Of The Seven Kingdoms

If Trump were the King of the Seven Kingdoms, there would be a wall dividing each of them that forbid anyone besides him and his pose to cross the borders. Then again, if Trump were the King of the Seven Kingdoms, someone would have certainly stabbed him in the back by now. Or shot an arrow through his guy while he sat on the toilet. Or slit his throat while he lay with a few hookers. Or took the easy way out and poisoned him. Then Ivanka would be sold to the Dothraki king by her brothers in an attempt to maintain their political status while Barron heads to the wall to join the Night’s Watch. 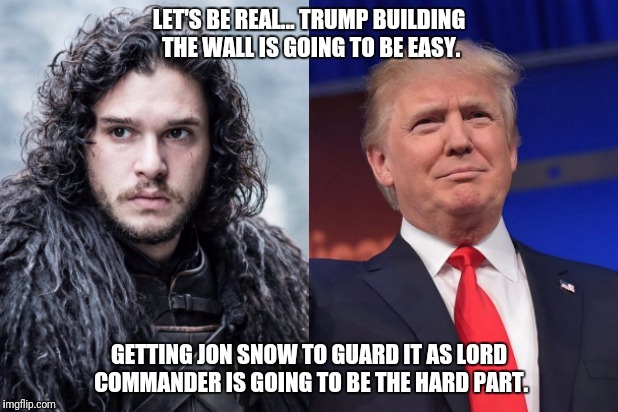 Even though Trump has had some difficulties finding the funding as well as majority approval for his precious border wall, building it will likely be the easy part. Of course, Jon Snow won’t be available to guard the border. Even if he were, it would be quite difficult for him to do it alone with the Night’s Watch. The Mexican border is nearly 2,000 miles long. Imagine much manpower (and how much taxpayer dollars) it will take to keep something like that up and running after it’s built! 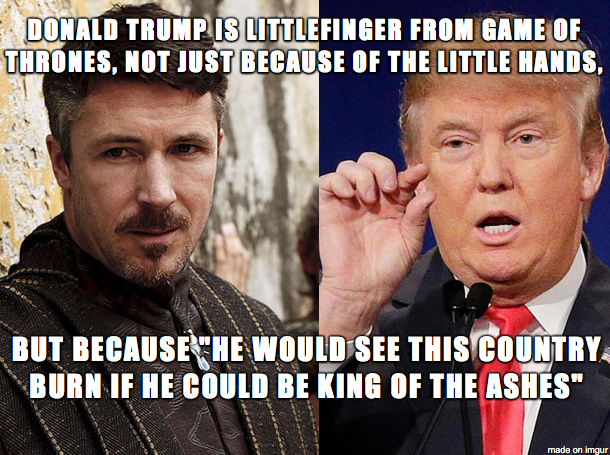 Petyr Baelish was nicknamed “Littlefinger” because of his small stature and his family’s ownership of the smallest of the Fingers, not because of the size of his hands. So, while Trump could easily take on this nickname, it wouldn’t be for quite the same reasons. What the two do have in common though is their desire to drive the world into the ground. Likely Trump will also experience a similar demise as Baelish did, at the hands of a few strongminded women who are sick of his crap.

7. Tell Them Your Name 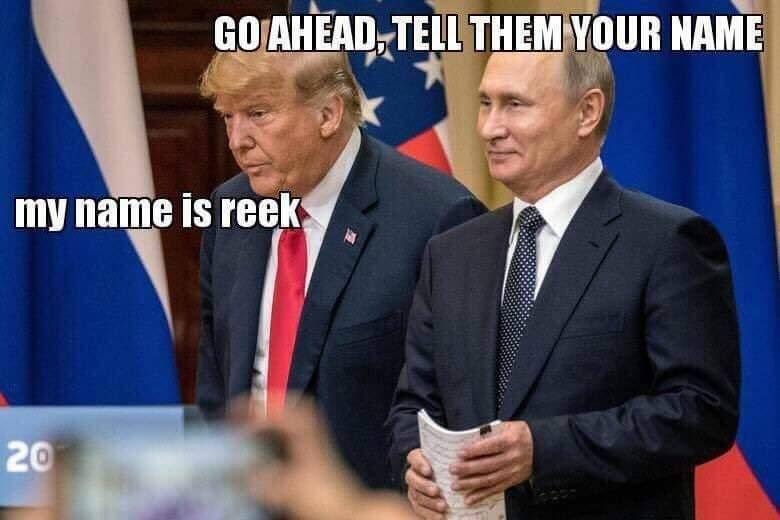 Putin and Trump’s relationship has been described in numerous ways including puppet and puppeteer, the pea and the pod, and now Ramsay and Reek. If you need to be reminded, Reek is the name Ramsay gives Theon Greyjoy after he captures and tortures him rather cruelly. Ramsay is so sick that he basically turns Greyjoy into a trained and ultimately terrified dog named Reek that he keeps in a kennel. It’s probably a comparison most true to Trump and Putin’s true relationship. 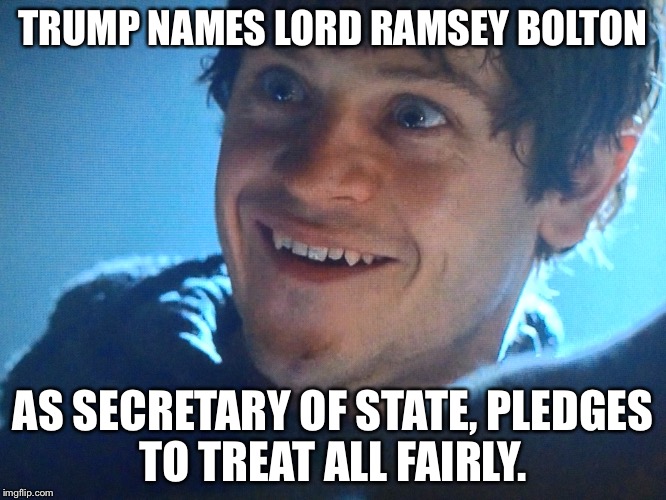 Speaking of Ramsey, he’s just the kind of guy Trump would make one of his trusted advisors. Or perhaps, Secretary of State. It’s the perfect step for our president to take in order to direct the American government towards what is ideal in his mind. Probably something like they have over in Communist China or North Korea. Ramsey could certainly lend Trump a hand when it comes to torture and prisoner obedience.

If you asked Trump how to make America great again, he’d list off things like closing the borders, getting rid of any immigrants with dark skin, and not spending a dime on climate change. In an alternative universe where Trump is the King of the Seven Kingdoms, he’d probably treat the Dothraki like he treats Mexicans. If Trump were smart, which we all know he’s not, he would be nicer to the Dothraki than he is to immigrants in America as they seem to enjoy killing people regardless of their political status.

10. Trump Is Worse Than Joffrey 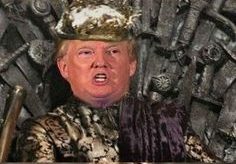 At least Joffrey had the age factor on his side as a reason for making such terrible decisions. If Twitter existed in Westeros, you know Joffrey would have been all over that sharing pictures of Ned Stark’s decapitated head, bragging about being king, and of course, sentencing his trolls to death. It’s what any teenager with too much power and responsibility would do. Kind of sounds like what Trump also does though.

If there were a kingdom in the Game of Thrones universe that really needed help to be great again, it would certainly be Westeros. In fact, I think they’re looking for a new ruler. Perhaps we should tell Trump he got the gig and just stick him on a plane somewhere.

Memes That Describe Each Kind Of American During The Midterm Elections