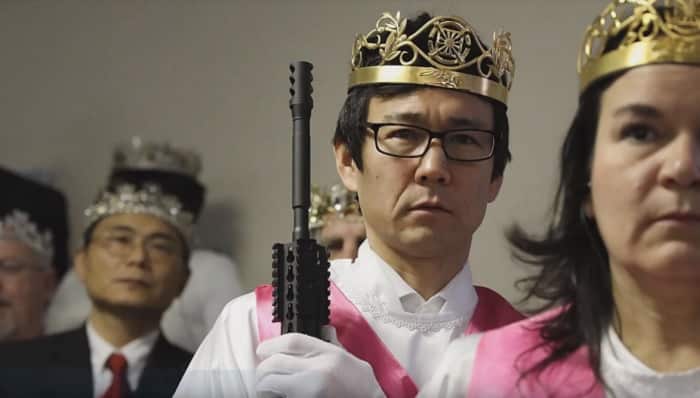 Well what do you know, power does grow out of a barrel of a gun. Political power? Sure. How about religious power? Well, one Christian cult residing in the US has an answer to that, as the said group incorporates AR-15 rifles and bullet crowns among their bibles and church robes. The said group calls itself World Peace and Unification Sanctuary and they follow Christianity with all guns blazing.

Unfortunately, they were not inspired by Samuel Jackson’s churchy hitman in Pulp Fiction. The World Peace and Unification Sanctuary or Sanctuary Church for short was founded by South Koreans in the US. It is now being currently lead by Rev. Hyung-jin “Sean” Moon and every single one of their members are allowed to carry guns both in and out of the church, talk about gunning for heaven.

“The Bible is very clear in showing that Christ requires us to be judges over the nation, judges of the wicked, to rule with a rod of iron. Psalm 2 and Revelation 2 say that the Believers will rule with a rod of iron,” said Moon. Additionally, Moon regularly does sermons and prayers at a makeshift gun range, “And Father, these are the right to bear arms that we exercise today.”

Their guns are not just for show, however, as they also conduct assault rifle and combat training for their members, rest assured, they do know how to shoot them with lethal efficiency. As expected, they are facing heavy criticism and legal actions from both the Christian community and federal law, with the former dismissing them as a mere Christian cult. Here’s a feature about them:

Still, Moon claims that he feels safer and more secure every night in bed knowing that he bears arms with a “rightful” intent. What do you think about Moon’s church and his Gun almighty though? Feel free to discuss in the comments.

What Has America Come To When You Can’t Build Your Very Own 3D-Printed Gun, an Unlicensed, Unregistered Killing Machine?

Now that the election results are almost final, we all want to ask what’s going to happen to Donald Trump after leaving the office? All US Presidents inevitably reach the point where they leave the White House.  Besides, the constitution states that all US Presidents are subject to a two-term limit. What do former presidents… END_OF_DOCUMENT_TOKEN_TO_BE_REPLACED

This is the first time in modern history that the US held presidential elections in the middle of a pandemic. In truth, the US elections may have overshadowed COVID-19 and the side effects are limitless. America is facing a tough crisis of discontentment with the current administration. An understandable case but a situation that may… END_OF_DOCUMENT_TOKEN_TO_BE_REPLACED

America’s political climate has been seeing records of changes over the past few decades. However, US election results record a list of surprising firsts for the first time in a long time. With the power of the youth overpowering the US election results, we see how differently they see the world. It shows how inclusivity… END_OF_DOCUMENT_TOKEN_TO_BE_REPLACED