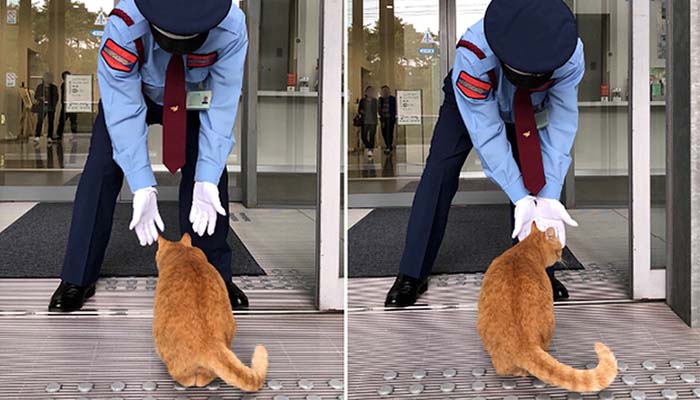 Any cat owner will tell you that there is no point trying to argue with a determined puss, and these two furbabies in Japan are no exception.

A pair of neighborhood cats have been trying for three years to get into Onimichi Municipal Museum in Hiroshima, Japan, with no success. Still, that doesn’t seem to have deterred them.

The art museum has been posting updates on the persistent pusses attempts for months, but they only recently went viral and have now been shared thousands of times.

And you have to admit, the tenacity of those kitties is inspiring.

A museum in Japan spends most of its day refusing entry to 2 cats trying to get in @bijutsu1 pic.twitter.com/WK4M3Y51hc

Footage posted to the official Twitter account show’s a standoff between the two cats and the museum’s security guard, and despite not letting them through the building’s double doors, he does have time for pats.

Dubbed Go (ginger) and Ken (black), the moggies have been great for boosting the venue’s social media presence, and are just two of many roaming the area.

And despite never making it past the entryway, the cats are now also a fixture of the museum’s gift shop, with cards, badges, bags, and umbrellas available to buy. The gallery even held a cat-themed festival of art in 2016 to honor the local felines.

Don’t worry little guys, we’ll sure you’ll make it past the guards some day. After all, when has a cat never got what it wanted in the end?

Skull-dinger’s Cat: Feline Decides To Be Friends With Halloween Skeleton