You know how Donald Trump is. Constantly pursued by a Rigged Witch Hunt which we are supposed to believe will eventually prove his innocent, Donald Trump must constantly be on the go. Whether it’s his presumably righteous fight against the investigation or just pacing the Oval in circles as he opines on how great Donald Trump is and how we should all be talking more about Donald Trump, he must be burning some substantial calories. No idea how he maintains his current weight with all the work he’s putting in draining the swamp, all those nights “burning the candle at both ends” (as my Catholic mother would say) it would be no surprise to discover that he’s at the very least worrying the weight off.

What’s that you say? Donald Trump is a lazy liar who can’t be bothered to keep his story straight, let alone his campaign promises? Everything he said in the election served only one goal: the make people Talk About Donald Trump? He has a work ethic that you could be compared to a sloth disfavorably? What a shocking turn of events!

Yes, as you’ve doubtless heard by reading the headline of this article, Donald Trump is a fat, lazy, TV-obsessed couch wart who can’t possibly be bothered to do his job as the leader of the country. But in addition to that (ho-ho, misdirection!), his schedule reveals massive swathes of so-called “Executive Time.” Far outweighing the hours he spends working, Executive Time appears to be a euphemism conjured by his staff so they don’t have to admit to themselves that DJT is no better a world leader than any random seventy-year-old white man who has never needed to overcome adversity once in his life would be. 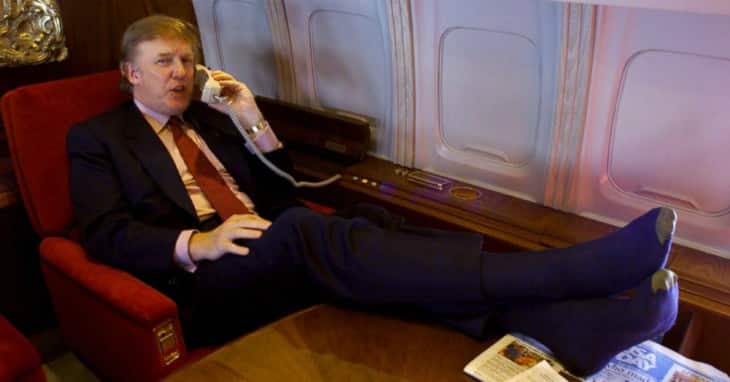 He’s getting to be like a villain in a kids’ cartoon! You know how, in order to appropriately characterize the series’ villain as a Bad Guy You Shouldn’t Feel Bad For When He Loses, TV shows will sometimes make them look insufferably selfish and unbelievably disinterested in the struggles of the people he controls, only pursuing his own pleasure at the cost of everything else? That’s exactly what Trump has become! Soon one his henchmen will interrupt his executive time, and when he does, Trump will overreact in punishing him so we know the Villian Is Petty AND Evil. Appropriately painted with the broadest brush we could find, the hero will now smash the baddy into pulp with nary a question about whether the hero’s murderous rampage through a sea of henchmen presumably just doing their jobs. Seems we might be about to cast Robert Mueller in that role as well.

Now that we’ve got a handle on just how mean our baddy is, we can proceed to mock him mercilessly! It is, at the very least, our duty. Because really, what is Trump doing with his Exec Time? If he were a higher-caliber villain, maybe someone with a pointed beard and a smoothly menacing accent, he could be abusing sex workers. But, just like his real job, Trump is bad at being a villain, so we’ll have to take our expectations down a notch.

See, he needs all that time to think in order to come up with the same racist and poorly-thought-out opinions that your conservative dad gets while drunk. Can’t imagine that takes hours of focused concentration, but maybe Trump needs the handicap.