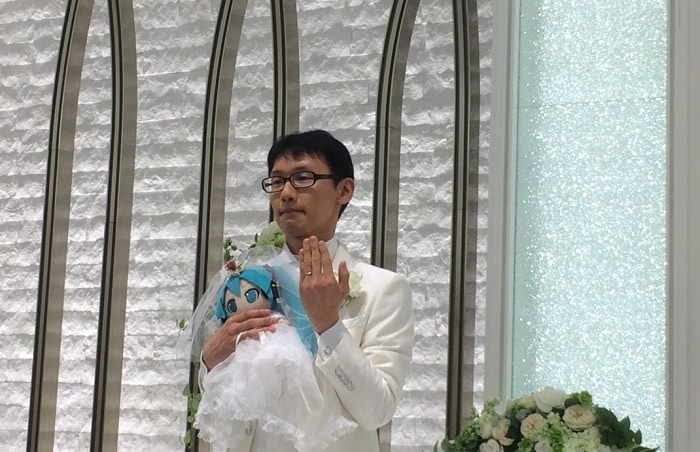 We are all probably old enough by now to know that love is a weird thing. While we do know what exactly love is, knowing who or what to love can make a world of difference. Still, the heart wants what the heart wants… or was it the hypothalamus in the brain? Anyway, one Japanese man fell in love with a fictional girl so much as to marry her. Love moves in mysterious ways indeed.

35-year-old Akihiko Kondo is not your average otaku (a person who lives and breathes anime culture). For unlike other otakus, he has decided to marry the girl of his dreams, which is Hatsune Miku. Miku is not your typical wife material though, for she is a mere Vocaloid software voicebank made to look like a 16-year-old anime girl. Here she is:

Make no mistake, Kondo LOVES Miku, he even spent a little over two million Yen ($17,000) for their wedding which took place on November 4. The venue isn’t cheap either, for it was a famous wedding chapel near Tokyo complete with wedding gowns and suits. Since Miku usually exists only in 2D drawings, Kondo had to bring a stuffed toy version of her so she could fit in the gown and even wear the ring.

The wedding even had as much as 39 guests attending the ceremony who brought their own gifts. Kondo claimed that he recovered 40 percent of the expenses through gifts.

Kondo, however, acknowledges that he cannot “own” Miku since there are many versions of the character, hence he said: “Next, it’s my turn to support the next person who wants to have a wedding ceremony with Miku or another 2D character.”

Watch Out Husbands, Smart Mirror With Sexy Anime Voice Out To Give Compliments To Ladies

Now that the election results are almost final, we all want to ask what’s going to happen to Donald Trump after leaving the office? All US Presidents inevitably reach the point where they leave the White House.  Besides, the constitution states that all US Presidents are subject to a two-term limit. What do former presidents… END_OF_DOCUMENT_TOKEN_TO_BE_REPLACED

This is the first time in modern history that the US held presidential elections in the middle of a pandemic. In truth, the US elections may have overshadowed COVID-19 and the side effects are limitless. America is facing a tough crisis of discontentment with the current administration. An understandable case but a situation that may… END_OF_DOCUMENT_TOKEN_TO_BE_REPLACED

America’s political climate has been seeing records of changes over the past few decades. However, US election results record a list of surprising firsts for the first time in a long time. With the power of the youth overpowering the US election results, we see how differently they see the world. It shows how inclusivity… END_OF_DOCUMENT_TOKEN_TO_BE_REPLACED