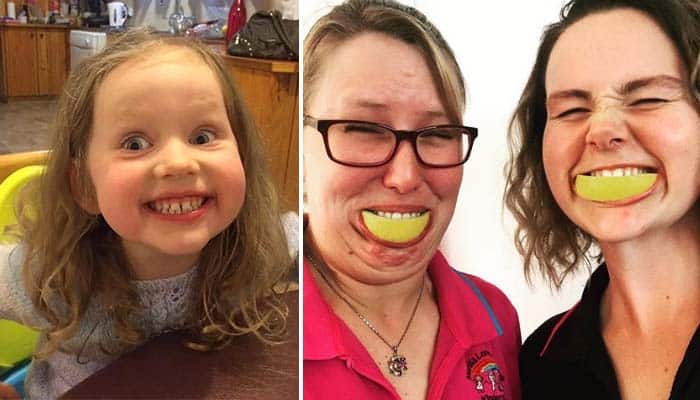 It’s easy to say social media activism doesn’t achieve anything, but the Ice Bucket Challenge that took over the web in 2014 bought in millions of dollars for ALS. While 2015’s #HoldACokeWithYourBoobsChallenge and 2016’s #ItsOkayToTalk raised awareness of breast cancer and male suicide respectively.

Now, a new challenge has arisen on the internet, and again it’s for a good cause. Dubbed the Lemon Face Challenge, partakers are shoving a quarter of a lemon in their mouth with the aim of helping a sick little girl to smile again.

Two years ago Annabelle Potts was diagnosed with brain cancer. The five-year-old, from Canberra, Australia, is suffering from diffuse intrinsic pontine glioma (DIPG), which has paralysed her cheeks and made it impossible for her to smile. The deadly disease only affects children and is often terminal.

In 2016, Annabelle’s parents Kathie and Adam Potts were told their daughter had only nine months left to live. The family travelled to Mexico, where Annabelle took part in an experimental therapy.

After enduring ten rounds of chemotherapy, costing a whopping £23,000 each, the tumor shrank and was no longer detectable. Unfortunately, the cancer was found to have returned in March this year, and her parents are desperately searching for another solution.

Posting on the Love for Annabelle Facebook page in October, a relative revealed the little girl’s health had drastically declined, with Annabelle now needing a shunt to drain fluid from her brain.

They wrote: “After Annabelle’s shunt insertion last Tuesday, she was not in a good place. Annabelle was unable to breathe on her own and could barely communicate.

“Kathie and Adam had to have some very difficult discussions about their beautiful girl.”

And while Annabelle’s condition doesn’t appear to have improved, people around the world have been working to cheer the youngster up via the #LemonFaceChallenge.The challenge was originally created by Aubreigh Nicholas, a 10-year-old from the US who was diagnosed with the same type of cancer in 2017.

After stumbling across the challenge online, Annabelle found it so hilarious she asked people across the globe to get involved and send her the results. Now even celebs have been taking part for Annabelle’s amusement, including Australian children’s entertainers The Wiggles and the West Tigers rugby team.

In a post explaining to others how they can join the fun, Kathie said: “All you have to do is record yourself eating a lemon wedge, explain why you are doing it, share your video on social media and nominate some friends to do it. Don’t forget to make it a public post so we can show Annabelle.”

Kind-hearted people can also donate to help fund Annabelle’s medical treatment, as well as towards research to find a cure.

This Genius Dumped His Girl After Thinking Her Cancer Was Contagious

The Blood Test, The Swab Test, and The Saliva Test      Essentially, there are three general types of COVID-19 testing produced so far. One is the rapid test, the second is the saliva test and the other is the swab test. The rapid test (also known as the anti-body test) uses blood samples. The swab test… END_OF_DOCUMENT_TOKEN_TO_BE_REPLACED

The COVID-19 pandemic is one of the biggest modern pandemics known in history. Currently, there are more than five million confirmed cases in the world, with a total of 333,000 deaths. A total of 1.6 million of these confirmed cases are in the US alone. The world is currently in a race of finding a… END_OF_DOCUMENT_TOKEN_TO_BE_REPLACED

Despite concrete data and research, people’s opinions will always be diverse when it comes to a variety of topics including religion, politics, gender, and more. Denial is a common reaction to many important discussions and serious world events. The COVID-19 pandemic does not differ from any issues and is subject to opinions from critiques all… END_OF_DOCUMENT_TOKEN_TO_BE_REPLACED

Back in January, when the Wuhan, China coronavirus broke out, it didn’t make it to the front page of newspapers, in print or virtual form. Today, January feels like a lifetime away. Like it or not, people around the world have adapted to the new normal – staying at home, frequent hand washing, and social… END_OF_DOCUMENT_TOKEN_TO_BE_REPLACED

Since the beginning of the year 2020, the whole world has been stupefied by the rapid spread of a deadly coronavirus known as COVID-19. World superpowers in the West were unable to prevent the virus from reaching their borders. Because of this fact, the novel coronavirus COVID-19 became a world-wide pandemic no less than three… END_OF_DOCUMENT_TOKEN_TO_BE_REPLACED

For months since the start of 2020, the attention of the world has focused on immediate response efforts to contain and combat the novel coronavirus, also known as COVID-19. The deadly virus has pushed millions of people into isolation.  This kept people in their homes for weeks and months away from their work, their friends,… END_OF_DOCUMENT_TOKEN_TO_BE_REPLACED