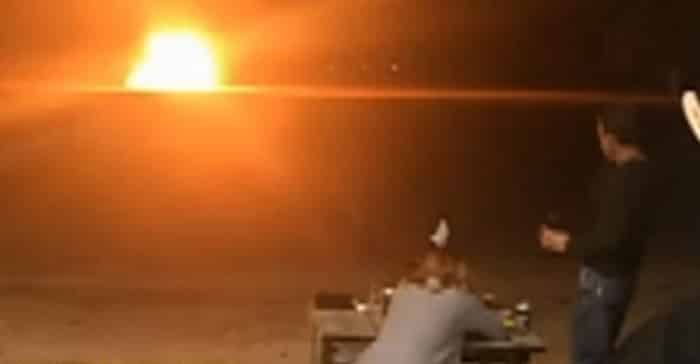 Here’s a video of Kimberly Santleben-Stiteler, from Texas, blowing her wedding dress to smithereens by firing a rifle round into 20 lbs of Tannerite from a distance of 200 yards to celebrate her divorce finalization.

Now, we’ve heard of divorce parties before but . . .  jeez louise!

Fourteen years of marriage, completed with a bang, literally. “We were all getting messages asking if that was our explosion people were feeling and hearing around the county, up to at least 15 miles away,” Kimberly’s sister, Carla Santleben-Newport, told reporters.

“It was like, ‘Uh, is everything okay over there’?” The explosion she explains, felt throughout parts of Medina County came from her sister’s divorce fiesta, at their dad’s farm in the small town of Lacoste, about 25 miles west of San Antonio. About 40 guests attended the soiree, who cheered on when the dress was obliterated, according to local press, which initially reported on the combustible exclamation mark at the end of her marriage.

Eh — we all handle the end of relationships and finding closure in differing ways. Kimberly, well, she uses explosives!

Keep scrolling for the video of Kim firing a high-powered rifle at explosives. The footage, comes equipped with the now-infamous explosion followed by the crowd’s reaction as it detonates.

Raise your hand if you agree ‘going out with a bang’ is the best way to depart matrimony. ✋

This Dog Upstaged His Humans on Their Wedding Day, But It’s Ok Because He’s Adorable