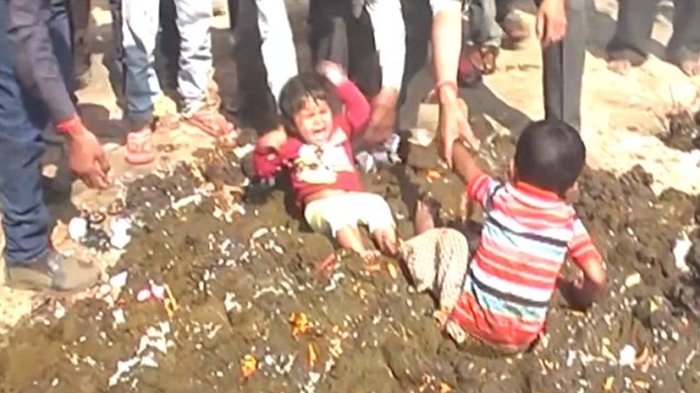 For “good luck,” children in Madhya Pradesh’s Betul district were placed or tossed in cow dung for Govardhan Puja, a Hindu festival held on Thursday.

Participants hope that the kids will be bestowed good health and shielded from disease as a result of the puja (ritual or prayer).

Govardhan Puja is too known as ‘Annaku,’ a Hindu fest that takes place on the fourth day of Diwali, during which worshipers pray to Lord Krishna. Govardhan Puja celebrates the day Lord Krishna defeated Lord Indra, who ushered heavy rainfall, obliterating fields.

Many Hindus venerate and worship cows. Hinduism is a religion that elevates the status of Mother to the tier of Goddess. Thereby, the cow is regarded a sacred animal, as it furnishes us life preserving milk. The cow is viewed as a care taker, a maternal figure to her people.

A lot of Hindus respect cows, too, for their docile nature. This represents the primary teaching of Hinduism, which is do not afflict harm to any animal (ahimsa). Cows represent strength and butter (ghee), as well. Cows are esteemed in society, and (mostly) all Hindus do not consume beef (cow meat).

Also in Hinduism, cow urine has an extraordinary significance as a medicinal beverage. Sprinkling of cow urine is believed to have a spiritual cleansing effect in addition.

Nepal Holds Tihar Festival Not To Eat Dogs, But To Celebrate Them

A Piglet And A Baby Cow Are Best Friends And It’s The Cutest Thing Ever!