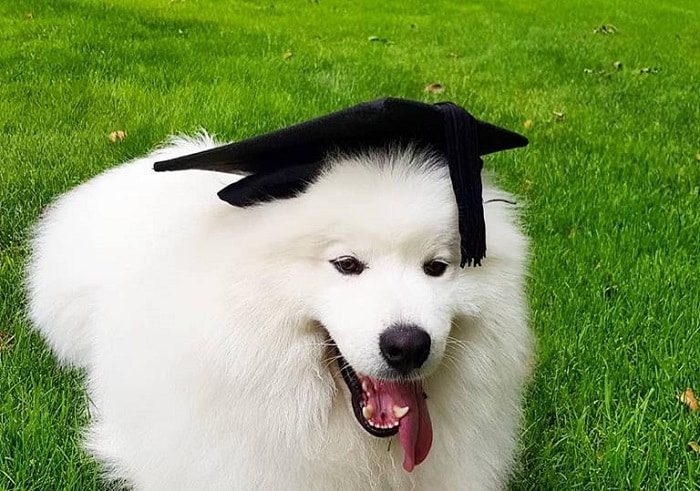 Don’t ever say to your dog that the good boy will never amount to anything. That can eat into their self-esteem… Because after all that’s been said and done, dogs are overachievers, and they like to achieve your attention. One special dog from Australia, however, has his sights set on something more than attention, for he has achieved the world’s first official university ‘dogtorate’ (pe)degree.

Jasper is not like the other good boys, for he now prefers to be called Dr. (Dogtor) Jasper despite having no knowledge of medicine. You see, Jasper the Samoyed dog recently graduated at University of New South Wales (UNSW) in Australia, academic cap, toga, and ceremony included. Apart from the dogtorate degree, Jasper was also dubbed as the official university dog of UNSW, this good boy is going places.

Bright as he may be though, Jasper’s dogtorate degree would not have been possible without the help of his owner, Jovi. Jovi was actually pursuing a Master of Law degree and took Jasper along for the ride. Jovi’s friends also encouraged her to take Jasper to school where her friends and pretty much everyone at the school looked after Jasper while Jovi is busy studying.

Thankfully, Jasper’s patience and penchant for running around in UNSW asking for pets from strangers paid off. When Jovi graduated from her Master of Law degree, UNSW also awarded Jasper with the honorary dogtorate award and degree. Being a Dr. Jasper, however, is not all pets and fetches, as it also comes with certain responsibilities such as attending university events.

Fur’real, You Can Now Get Paid To Be A Professional Dog Cuddler

Now that the election results are almost final, we all want to ask what’s going to happen to Donald Trump after leaving the office? All US Presidents inevitably reach the point where they leave the White House.  Besides, the constitution states that all US Presidents are subject to a two-term limit. What do former presidents… END_OF_DOCUMENT_TOKEN_TO_BE_REPLACED

This is the first time in modern history that the US held presidential elections in the middle of a pandemic. In truth, the US elections may have overshadowed COVID-19 and the side effects are limitless. America is facing a tough crisis of discontentment with the current administration. An understandable case but a situation that may… END_OF_DOCUMENT_TOKEN_TO_BE_REPLACED

America’s political climate has been seeing records of changes over the past few decades. However, US election results record a list of surprising firsts for the first time in a long time. With the power of the youth overpowering the US election results, we see how differently they see the world. It shows how inclusivity… END_OF_DOCUMENT_TOKEN_TO_BE_REPLACED