Undocumented Immigrants Are Not Coming for You While You Sleep

“The violence and the poverty is expelling us.”

That was the straightforward message that galvanized thousands of Hondurans into signing on for a mass exodus from their country. Lead by one-time legislator and human rights activist Bartolo Fuentes, the group trudged out of Honduras in early October, gaining followers — and notoriety — with every mile they put between themselves and home.

It’s just too damn bad these people chose to make the hike through thousands of miles of unwelcoming territory just to get to a place run by a tangerine egomaniac with an irrational fear of brown people.

Like it or not, here comes the migrant caravan, a gigantic, rolling human rights disaster and the latest bullshit that Donald Trump is using to distract us from the Mueller investigation. To some of us, the migrant caravan is a parade of the worst crimes that a corrupt government can visit upon its people.

A campaign launched on Facebook was all the juice it took to get the people of Honduras packing their belongings. Thousands of people joined the call for exodus. Each story was different (because everyone is a snowflake) but sift through enough examples and some larger themes become evident.

Gunshot wounds are rampant among the travelers in the migrant caravan. They’re prizes earned as a result of Honduras’ growing gang problem.

If the gangs weren’t bad enough, incompetent governance has kickstarted rampant inflation. Basic necessities are increasingly expensive. In other words, in Honduras, it costs a bunch of money to be the victim of gang violence. It’s like living in Los Angeles during the early nineties, with one big exception.

This douche. via GIPHY

Donald Trump Hates the Crap Out of Foreigners

Immigrants are evil is right up there with “fake news” as one of D-Town’s greatest hits. Whenever he’s got free time between hating on the “Democrat Party,” congratulating the NRA, firing people, and licking Vladimir Putin’s balls, old Trump-y likes to talk about how scary Latin Americans are.

Even then, he was worried about the encroaching threat. So, it made sense that, as the migrant caravan picked up sticks with its payload of thousands of people from Honduras, Nicaragua, and Guatemala, Donald Trump saw a long-term opportunity to reach out to the nastiest part of his voter base and vent his totally-not-racism.

And vent he has.

Hide Your Valuables and Lock Your Daughter in the Closet

Throughout October, Donald Trump spilled a bucket of Twitter ink targeting the migrant caravan. On the 16th, he kicked things off by threatening the President of Honduras, a grade-A donger named Juan Orlando Hernández, with the removal of all US aid from the country.

Trying to blame Honduras went over like a lead balloon. Mostly because Trump voters think Honduras is a Japanese automaker.

Two days later, we were treated with an audiovisual presentation, and a new, familiar enemy.

And just in case you weren’t already livid at the way the Democrats have screwed up our country so much that people are fleeing toward it, Trump dropped this gem a few hours later.

A few days after that, on the 21st, Donald Trump again visited the topic of those nefarious illegal aliens crossing our “Souther” border.

He’s right, though. The Souther border has been hitting the gym. He’s totally keeping it tight.

When threats and shouting didn’t work, Trump turned to his favorite method of winning people over: he started lying.

And once Trump starting flinging the bullshit, dozens of others were happy to join in. The number of migrants went from a couple thousand to nearly 50,000 people. For some reason, US citizens started to become worried that an organized invasion was flooding toward the US-Mexico border with nothing but malicious intent.

Setting Up for a War We Can’t Have

In early November, Trump vowed to send as many as 15,000 troops to the border to prepare for the onslaught from the migrant caravan. That’s more than twice the highest estimate put out by those following the caravan on their journey. In other words, that’s two (and more likely three) highly-trained American soldiers for every one half-starved Honduran reaching the end of a 2,000-mile hike.

The best part about the military build-up (besides how much the locals hate the increased troop presence) is that the troops being sent to the border can’t technically do anything. Why you ask?

Here it is, in big letters:

According to law professor Mary Ellen O’Connell (https://www.politifact.com/truth-o-meter/article/2018/nov/06/migrant-caravan-invasion/), the migrant caravan can’t legally be considered an invasion, because an “invasion” is what happens when a group of armed militants physically assault a population … like the US did in Vietnam.

The migrant caravan, by contrast, is a bunch of people whose biggest flaw is the foolish belief that there’s a welcoming population roughly 1,200 miles north of where they are.

If the situation on the Mexican-US border were an invasion, then Texas’ border towns wouldn’t be some of the nation’s safest communities. Even with thousands of people slowly migrating north in one concerted effort, the scene at the border is still the same one that’s played out thousands of times before. No matter how crowded the crossing is, it’s still just a bunch of poor people heading north in the hopes of grabbing a slice of that elusive American Dream.

Okay, closing time. I won’t preach at you, because if you haven’t been swayed by the argument to this point, then arguing that we could house and feed these people for, like, one-one-millionth of the amount of money we spend to fund the military (if that) probably won’t do much to melt that heart of yours.

So, instead, let me hit you with a little Latin But don’t worry, it’s not one of those douchey Latin phrases you won’t be able to guess (or that I’ll have to go into obnoxious, painstaking effort to explain).

Here it is: e pluribus unum 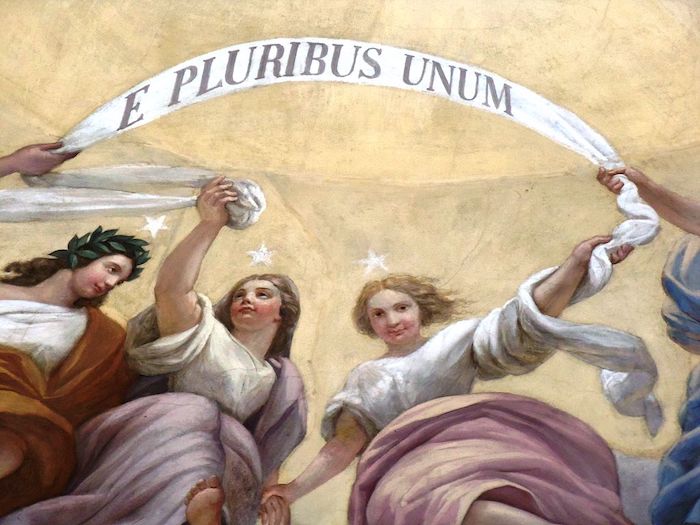 You know that one, right? It means, “out of many, one,” and it refers to the unification of the 13 original colonies — who hated the crap out of each other, by the way — into one, extra-badass nation. The phrase is likely etched in your childhood memory. It’s on the seal of the country. It’s on the back of the $1 bill. It’s on every single United States coin (and it has been since 1873, by legal mandate).

The reason that e pluribus unum is everywhere is to remind us that the United States’ success depends irrevocably on a diverse group of people finding a common goal. It’s our thing. The nation grew with the speed and ferocity it did because we welcomed a bunch of disenfranchised people and told them all they had to do once they got here (however they got here) was sign some paperwork, chip in on taxes, and work their ass off. You might be one of those people who considers the hardships of countries around the world and responds, “Not our problem.”

Well, it is now. And shooting at it, threatening it, or screaming at it, won’t solve the problem.