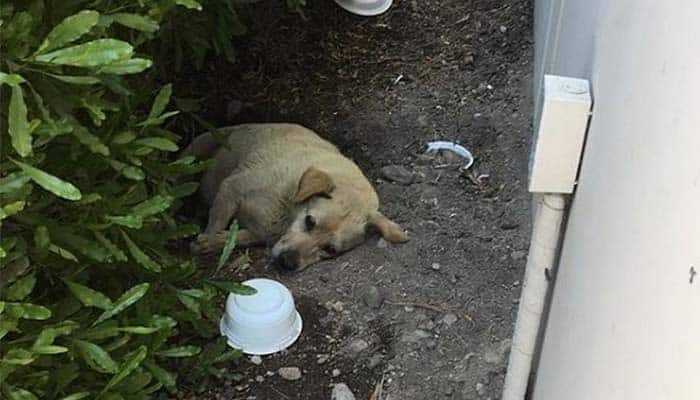 A lonely labrador that was left living on the streets after his owners abandoned him is looking for a new home.

Larry was found dumped in the dirt by a warehouse in California, after his family moved away and left him behind.

The eight-year-old was left alone for months, only surviving because truck drivers noticed the forlorn lab hanging around the area and gave him food and water. However, their offerings were often mistakenly thrown away by cleaners of the company that owned the warehouse, leaving Larry with nothing.

But just as things were looking grim for Larry, a delivery driver discovered his plight and appealed for help.

After noticing the dog had been lying in the same spot for a long time, she began the Instagram account – Oldboy909 – dedicated to the “poor old boy” she’d spotted on her daily route.

In her first post to the account, she said: “Every day I see him hungry and thirsty waiting for any truck driver with enough heart to give him something to eat or drink.

“It breaks my heart and I wish I could help him but my situation simply will not allow me to bring him home.

“It’s hot so I poured my last bottle of water in a styrofoam hamburger container. I can go and get food and water; he cannot. If you know anyone that can help him please tag them.”

Fortunately, the post came to the attention of the Leo Love Rescue, whose staff managed to convince Larry to come with them to the shelter.

They quickly noticed that his stomach was bloated, despite months without sustenance, and took him straight to the vets. Larry was diagnosed with Cushing’s disease, and spent six weeks living at the vets while he adjusted to his new medication.

“In that time he was kind of sad, and a little depressed and reactive with other dogs,” said Sasha Abelson, president of Leo Love.

But as the medication began to take effect, Larry began to feel more like himself, and his true personality began to shine. He was moved from the shelter to doggy daycare, where he now waits for a new family to claim him.

His health issues are now managed by the medication, but unfortunately the £180 a month cost is deterring potential owners.

“Not everyone wants a dog with an automatic expense attached,” Abelson explained. “And he doesn’t like being alone, but he’s been abandoned, so we can’t really blame him for that.”

With a face like that, we imagine it won’t be too long before Larry finds his forever home.

This Doggo Upstaged His Humans on Their Wedding Day, But It’s Ok Because He’s Adorable

The US arms sale industry is large and successful. More than 30% of exported weapons in the world come from the United States. They supply to no less than 90 nations making it one of the largest suppliers of weapons in the world. The US makes an estimate of almost 200 Billion dollars in annual… END_OF_DOCUMENT_TOKEN_TO_BE_REPLACED

Now that the election results are almost final, we all want to ask what’s going to happen to Donald Trump after leaving the office? All US Presidents inevitably reach the point where they leave the White House.  Besides, the constitution states that all US Presidents are subject to a two-term limit. What do former presidents… END_OF_DOCUMENT_TOKEN_TO_BE_REPLACED

This is the first time in modern history that the US held presidential elections in the middle of a pandemic. In truth, the US elections may have overshadowed COVID-19 and the side effects are limitless. America is facing a tough crisis of discontentment with the current administration. An understandable case but a situation that may… END_OF_DOCUMENT_TOKEN_TO_BE_REPLACED