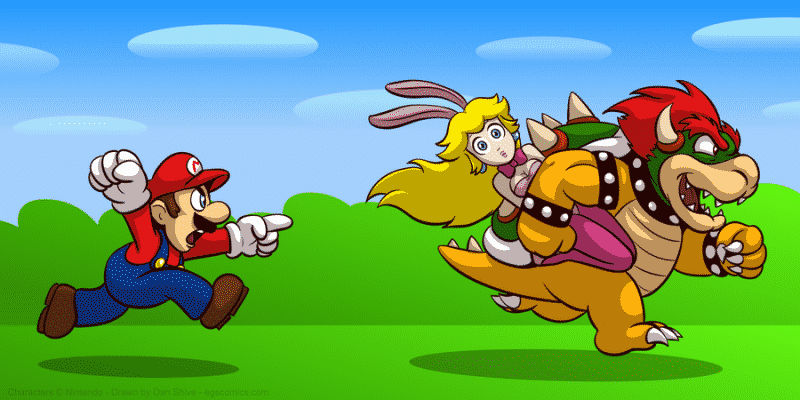 We all love us some Super Mario right? Who could say no to an Italian plumber who uses ‘shrooms and whose “princess” girlfriend keeps running off with someone else? Well, the thing is, some Super Mario fans might have gotten more than what they paid for when they bought the most recent Super Mario history book, as it came bundled with a poetry collection titled, “Grabbing Pussy.”

One resident from Atlanta with the Twitter handle @brandokay was an avid Mario fan, so much so, that he can remember all the coin collecting, turtle jumping, and brick smashing in the game, what he does not recall is the “pussy grabbing,” involved in the game. That’s because there is no such thing, hence the inclusion of “Grabbing Pussy” poetry book came as quite a shock.

This is one whopper of a printing error, @BossFightBooks pic.twitter.com/SHPPuYmyRR

He opened the box he ordered and there it was, “Grabbing Pussy” along with Alyse Knorr’s Super Mario Bros. 3. Of course, he did read it and turns out, it was quite a profound collection of uh, transgressive poems. Check it out:

So how did that happen? Apparently, there was a packing error. Both books had different publishers but both of those publishers only shared one contracted printing press. Both books also had the same size and the same number of pages. Well, put two and two together and you get quite a bundle.

No need to worry about the kids though since Alyse Knorr’s Super Mario book is apparently targeted at adults, meaning no child fan of Super Mario is going to have trauma because of a poem about genitals… possibly.

Gift-giving isn’t just a seasonal affair between friends, families and acquaintances. The art of gift-giving is also conducted on a national scale with countries often sending each other big, weird and expensive gifts. Experts in all things gifts, Vanilla Reindeer put together some examples of these expensive and odd gifts that have been shared between… END_OF_DOCUMENT_TOKEN_TO_BE_REPLACED

There are lots of ways you can make Pres. Trump feel welcome: you can offer him coffee, or mow a penis into a field for him to view as his plane lands. The willie in question has been chopped by Born Eco ahead of the arrival of President Trump, who visited the UK Monday for… END_OF_DOCUMENT_TOKEN_TO_BE_REPLACED

The year isn’t even halfway over, yet Donald Trump has managed to make a fool of himself and our country countless times. From inviting the national college football champions, the Clemson Tigers, all the way to the White House for some McDonald’s to his to the dreaded results of Mueller’s investigation, it has been one… END_OF_DOCUMENT_TOKEN_TO_BE_REPLACED

Republicans have always said that when they gained control in Congress, they would work to overturn Roe v. Wade and here they are, cashing in on that promise one state at a time. So far, Alabama, Arkansas, Georgia, Kentucky, Missouri, and Ohio have all passed incredibly restrictive laws on abortions, making it illegal for women… END_OF_DOCUMENT_TOKEN_TO_BE_REPLACED

If you’re on Snapchat, then you’ve probably played around with (and were likely horrified by) their filter gender swap filters. While you’re probably using these filters to send hilarious pics to your friends, some guys using them to create Tinder profiles. What likely started out as a joke has quickly evolved, and these guys are… END_OF_DOCUMENT_TOKEN_TO_BE_REPLACED

“Milkshaking” is a hilarious trend in Britain where a milkshake is thrown at and ideally lands on a far-right politician or activist. The point of this nonviolence protest is to humiliate them without causing injury. Physical injury at least. There’s no doubt that milkshaking has led to a few bruised egos. Not only is this… END_OF_DOCUMENT_TOKEN_TO_BE_REPLACED