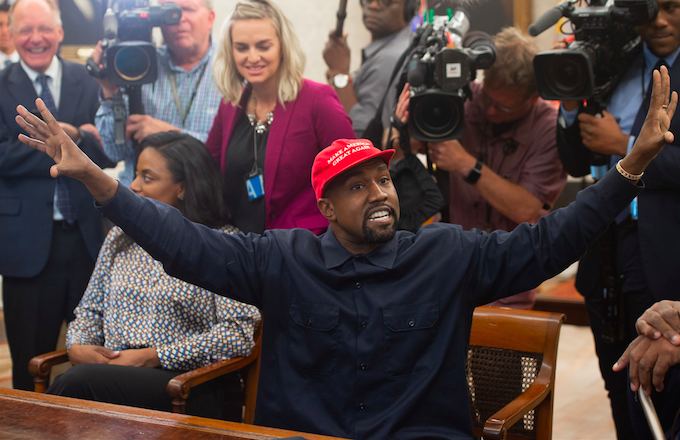 For some reason, celebrities seem to think that because they’re influential that they should get involved in politics. They could be singers, reality stars, or notorious for literally doing nothing yet they’re having meetings with the president of the United States. They have no experience in the field nor do they have a reputation of being much of a brain. Here is a list of celebrities who really need to stay out of politics.

Roseanne’s inability to think before she speaks might have gotten her on television, but it also got her kicked off. Having no filter is great when you’re a comedian on stage, but once you get networks involved, it’s best just to zip your lips and collect those paychecks. Barr apparently has made enough money throughout her career to where she doesn’t feel like she needs to mind her manners. As we all know this got her fired and killed-off her own television show. At least she learned her lesson and has since kept her mouth shut when it comes to politics. Just kidding. She learned nothing and continues to rant all over social media.

Kanye West might think he and Trump are best buddies, but he’s clearly having some kind of mental breakdown. One where he likes to use words like “dragon energy” and call slavery a “choice.” After his recent visit to the White House, it became pretty clear that West has either lost his damn mind or is getting paid a lot of money to say a bunch of nonsense he couldn’t possibly believe. If you read the full transcript of their meeting, you’ll see that West had a lot to say on a number of issues. Thrown in between his usual nonsense, it is almost an intelligent discussion. With zero political experience, it makes people wonder where all of these thoughts are actually coming from. Apparently, West had the same realization as he swore off politics soon after their meeting claiming he felt he was being “used” to spread messages he doesn’t believe in. At least someone had the courage to tell him to stay out of politics. Stick to fashion.

Kim Kardashian West might be all about prison reform these days, but it wasn’t too long ago that she was all about contouring and butt injections. Perhaps her husband is rubbing off on her though because she also had a meeting with the president not too long ago. There’s something about these reality stars, they tend to stick together. Even if Kim had some kind of mind-blowing proposal on prison reform for Trump, we all know he wasn’t listening to a word she said. The only thing that perv was doing during their meeting is picturing Kim naked and running scenes from her sex tape through his mind.

When it comes down to it, celebrities don’t live in the same world as the rest of us. They may have once, but they’re far better off focusing on what they’re good at. Entertaining us.

Gift-giving isn’t just a seasonal affair between friends, families and acquaintances. The art of gift-giving is also conducted on a national scale with countries often sending each other big, weird and expensive gifts. Experts in all things gifts, Vanilla Reindeer put together some examples of these expensive and odd gifts that have been shared between… END_OF_DOCUMENT_TOKEN_TO_BE_REPLACED

There are lots of ways you can make Pres. Trump feel welcome: you can offer him coffee, or mow a penis into a field for him to view as his plane lands. The willie in question has been chopped by Born Eco ahead of the arrival of President Trump, who visited the UK Monday for… END_OF_DOCUMENT_TOKEN_TO_BE_REPLACED

The year isn’t even halfway over, yet Donald Trump has managed to make a fool of himself and our country countless times. From inviting the national college football champions, the Clemson Tigers, all the way to the White House for some McDonald’s to his to the dreaded results of Mueller’s investigation, it has been one… END_OF_DOCUMENT_TOKEN_TO_BE_REPLACED

Republicans have always said that when they gained control in Congress, they would work to overturn Roe v. Wade and here they are, cashing in on that promise one state at a time. So far, Alabama, Arkansas, Georgia, Kentucky, Missouri, and Ohio have all passed incredibly restrictive laws on abortions, making it illegal for women… END_OF_DOCUMENT_TOKEN_TO_BE_REPLACED

If you’re on Snapchat, then you’ve probably played around with (and were likely horrified by) their filter gender swap filters. While you’re probably using these filters to send hilarious pics to your friends, some guys using them to create Tinder profiles. What likely started out as a joke has quickly evolved, and these guys are… END_OF_DOCUMENT_TOKEN_TO_BE_REPLACED

“Milkshaking” is a hilarious trend in Britain where a milkshake is thrown at and ideally lands on a far-right politician or activist. The point of this nonviolence protest is to humiliate them without causing injury. Physical injury at least. There’s no doubt that milkshaking has led to a few bruised egos. Not only is this… END_OF_DOCUMENT_TOKEN_TO_BE_REPLACED