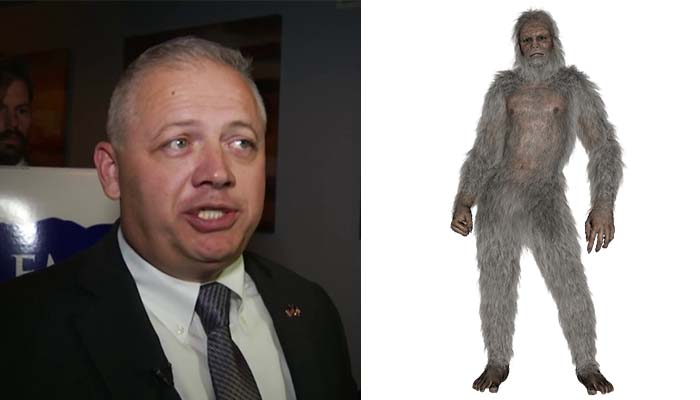 Back in July, we were all shocked when Virginia Republican Denver Riggleman was accused of sharing “Bigfoot Erotica” on Instagram.

Now, we’re more surprised than ever, as the 58-year-old politician has actually won a seat in the midterms.

Riggleman beat his Democratic opponent Leslie Cockburn by 53.3% to 46.7%, taking the seat for Virginia’s 5th district.

The controversy over Riggleman’s sexual inclinations began in the summer, when Cockburn – a lauded journalist and mother of Hollywood actress Olivia Wilde – shared an awkward screenshot from her challenger’s Instagram account.

The image was a handdrawn sketch of Bigfoot, with a black bar covering what we assume to be its genitals.

My opponent Denver Riggleman, running mate of Corey Stewart, was caught on camera campaigning with a white supremacist. Now he has been exposed as a devotee of Bigfoot erotica. This is not what we need on Capitol Hill. pic.twitter.com/0eBvxFd6sG

Cockburn captioned the shot with: “My opponent Denver Riggleman, running mate of Corey Stewart, was caught on camera campaigning with a white supremacist. Now he has been exposed as a devotee of Bigfoot erotica. This is not what we need on Capitol Hill.”

Riggleman quickly hit back at the accusation, claiming the image “had nothing to do with Bigfoot erotica.”

He said: “My buddies thought this pic was fitting for my birthday next week and to celebrate my new book release in a month or two.”

The book? The Mating Habits of Bigfoot and Why Women Want Him.

However, it’s unclear where or not it was actually published, as anyone has yet to see it on sale.

At the time of the exposé, it was also revealed that Riggleman was following several offensive right-wing Facebook pages, including groups that made jokes about rape and racism. In response, a spokesperson for Riggleman claimed that the politician didn’t remember liking the pages or joining said groups, and has since unfollowed them.

Each to their own, we guess.

Gift-giving isn’t just a seasonal affair between friends, families and acquaintances. The art of gift-giving is also conducted on a national scale with countries often sending each other big, weird and expensive gifts. Experts in all things gifts, Vanilla Reindeer put together some examples of these expensive and odd gifts that have been shared between… END_OF_DOCUMENT_TOKEN_TO_BE_REPLACED

There are lots of ways you can make Pres. Trump feel welcome: you can offer him coffee, or mow a penis into a field for him to view as his plane lands. The willie in question has been chopped by Born Eco ahead of the arrival of President Trump, who visited the UK Monday for… END_OF_DOCUMENT_TOKEN_TO_BE_REPLACED

The year isn’t even halfway over, yet Donald Trump has managed to make a fool of himself and our country countless times. From inviting the national college football champions, the Clemson Tigers, all the way to the White House for some McDonald’s to his to the dreaded results of Mueller’s investigation, it has been one… END_OF_DOCUMENT_TOKEN_TO_BE_REPLACED

Republicans have always said that when they gained control in Congress, they would work to overturn Roe v. Wade and here they are, cashing in on that promise one state at a time. So far, Alabama, Arkansas, Georgia, Kentucky, Missouri, and Ohio have all passed incredibly restrictive laws on abortions, making it illegal for women… END_OF_DOCUMENT_TOKEN_TO_BE_REPLACED

If you’re on Snapchat, then you’ve probably played around with (and were likely horrified by) their filter gender swap filters. While you’re probably using these filters to send hilarious pics to your friends, some guys using them to create Tinder profiles. What likely started out as a joke has quickly evolved, and these guys are… END_OF_DOCUMENT_TOKEN_TO_BE_REPLACED

“Milkshaking” is a hilarious trend in Britain where a milkshake is thrown at and ideally lands on a far-right politician or activist. The point of this nonviolence protest is to humiliate them without causing injury. Physical injury at least. There’s no doubt that milkshaking has led to a few bruised egos. Not only is this… END_OF_DOCUMENT_TOKEN_TO_BE_REPLACED