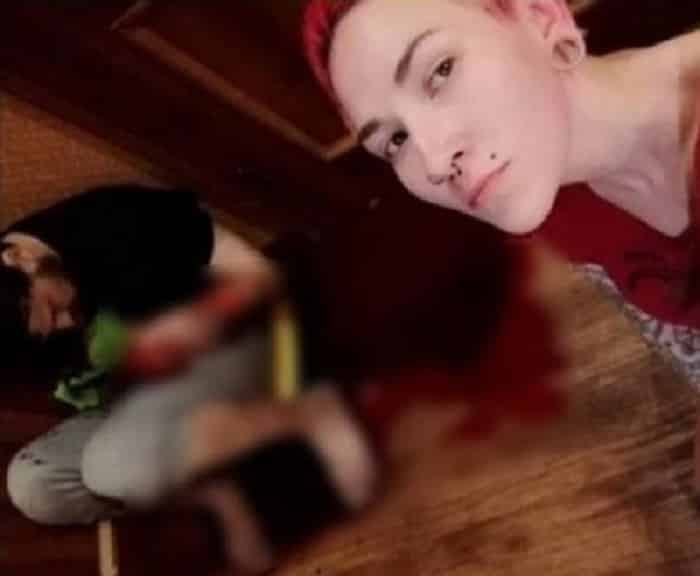 There are plenty of things you can do to get revenge on your ex. However, instead of resorting to toxic and harmful stuff, you should simply move on with your life and be happy– pretty soon they’ll be rolling on their bed in agony because of this, it’s effective. However, that is easier said than done. Some people get too violent, such as one woman from Siberia, Russia, who stabbed her ex and took a selfie afterwards.

A former couple known only by their social media names as Olga and Oleg was the subject of much buzz back at the end of October. Apparently, the two had a child and were separated. However, it seems they decided to meet up and that led to a drunken spat which escalated and resulted in Olga stabbing her ex-husband in the abdomen. In Olga’s defense, Oleg “tried to strangle her,” she told the police.

One would think that 25-year-old Olga would panic at what she did even if it was just self-defense since the wound proved quite dangerous and Oleg was bleeding like a pig. Instead of running for help or calling an ambulance immediately, Olga, well, took a selfie… with her copiously bleeding ex-husband in the background. She then sent it to her friends for some reason, and that led the photo to circulate online:

Only hours after the incident did Olga realize what she had done, “Guys, I stabbed my ex-husband with a knife. I was taken to accident and emergency for three hours. And only now have I cleaned up everything. It looks like I am a beast.”

Needless to say, Olga was arrested on suspicion of “exceeding justifiable self-defense” but was released. She then promised to never leave her place of residence since she needed to take care of their daughter. Meanwhile, Oleg survived and underwent emergency treatment for his injury.

The moment he was inaugurated, immediate changes made by Biden made headlines across the country. These are many of the controversial issues and topics that were shunned and ridiculed by the former administration. Americans can finally breathe a sigh of relief that these concerns have finally reached government policies. It seems clear that Biden has been… END_OF_DOCUMENT_TOKEN_TO_BE_REPLACED

Presidential pardons are one and many in the history of the US. There are many times when US Presidents granted reprieves for their citizen’s misdeeds. The US President may grant a pardon for any individual, including himself, for any crimes done against the country and its citizens. This issue of Presidential pardons has been trending… END_OF_DOCUMENT_TOKEN_TO_BE_REPLACED