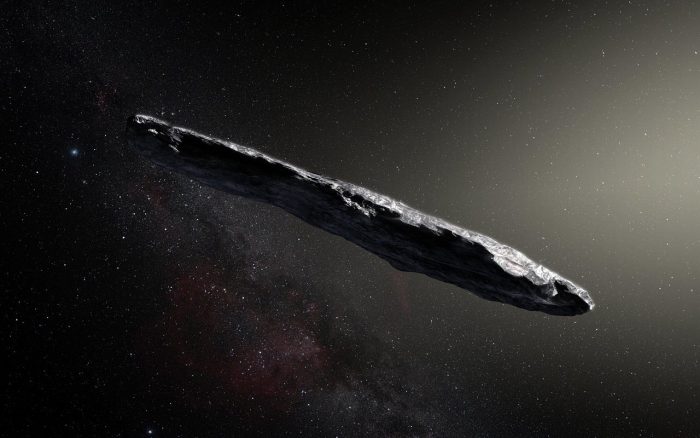 Usually, when people say “it’s aliens,” they are believing their own lies or far-fetched assumptions. Why else would that line become a meme?  However, that line being said by astronomers themselves is definitely not something one should laugh at, after all, those guys are scientists. So what happens when esteemed astronomers claim that the asteroid Oumuamua is an alien probe? Well then, it’s aliens.

At least, that is what astronomers Shmuel Bialy and Abraham Loeb are suggesting. Bialy and Loeb believe that Oumuamua, which has been in our solar system for nearly a year, was part of an alien probe which broke off. Additionally, the two also reasoned that Oumuamua could have been the “solar sail” of an alien vessel– the part which propels the supposed alien vehicle.

Bialy and Loeb’s educated hypothesis about Oumuamua stemmed from the fact that it accelerated as it left our solar system instead of slowing down. Other astronomers believed that it was merely a comet which is undergoing outgassing (pretty much a space fart) hence its acceleration. However, Bialy and Loeb suggested that Oumuamua would have spun then if that were the case. Instead, the asteroid remained flat during the acceleration.

The two even went as far as to claim that the said asteroid could have been powered by sunlight, allowing an alien craft to travel using only light as fuel. Though no radio signals were detected from it, nevertheless, Bialy and Loeb say that could have been because Oumuamua was a just a debris of the actual alien probe. Still, Oumuamua remains a mystery due to its elongated “cigar” shape, which was weird for an asteroid. It also may have sped up away from Earth seeing as how some countries here treat “aliens” badly.

Just this week, lawmakers approved a bill establishing the District of Columbia (D.C.) as the 51st state of the United States of America. This is after multiple calls and protests from the citizens to finally consider D.C. as a state.  However, the bill is not out of the woods yet as it faces multiple oppositions… END_OF_DOCUMENT_TOKEN_TO_BE_REPLACED

John Bolton’s new book entitled ‘The Room Where it Happened’ had been stirring up quite the attention since it was announced for release last week. Officially released only June 23, the new book seems to threaten the Trump administration as there had been moves to get it unpublished. The request was later on turned down… END_OF_DOCUMENT_TOKEN_TO_BE_REPLACED

Learning about the Juneteenth Holiday The Juneteenth holiday, celebrated every 19th of June, is a commemoration of the liberation of enslaved African-Americans in the United States. It was on the 19th of June 1865 when Union Army General Gordon Granger announced General Order No. 3 in Galveston, Texas officially emancipating slaves in the entire state.… END_OF_DOCUMENT_TOKEN_TO_BE_REPLACED