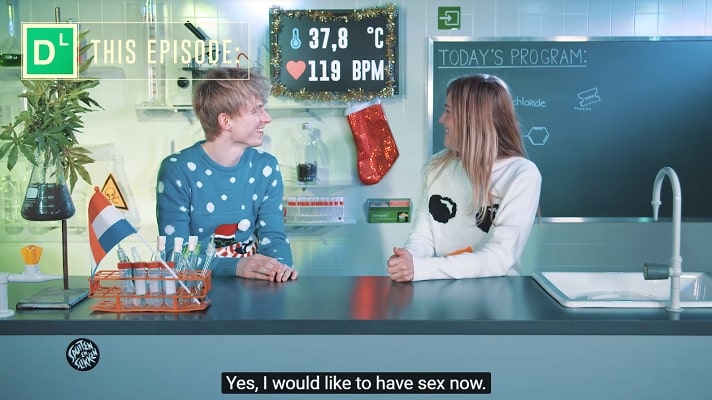 Here’s a trivia to wrap your head around, drugs and drug abuse are older than Jesus Christ. They date back thousands of years before Christ was even born. Suffice to say, people can and will be exposed to them, whether directly or not. If you do find yourself curious about drugs but do not want the chemical or legal repercussions, don’t worry, YouTube’s professional drug testers got you covered so you can avoid this:

That’s right, there are people who will test out recreational drug effects. They even have a YouTube channel called Drugslab and consists of Dutch people… thank goodness for the Netherlands.

Their aim is not to promote recreational drug use, but rather to promote responsibility in “using.” As such, they test out the effects of several drugs and give sober(?) viewers a peek into how it affects humans. Here’s one of their weed videos, make sure to turn on the closed captions (CC):

They also test out some of the harder drugs out there, such as cocaine, ecstasy, and valium to name a few. However, all their drug samples are monitored by the Dutch Ministry of Health. The “tests” are also done in a controlled environment but some of the drug episodes do tend to dangle precariously, like when one of them tested out the “rape drug”:

Note the part where the Nellie, one of the testers, tried to kiss her sober show partner thrice and they had to cut to another scene.

Of course, because of their content, they have drawn a lot of controversies, with some critics even pointing out that they are doing it for entertainment instead of research purposes. What do you think about them though? Feel free to discuss in the comments below.

The Blood Test, The Swab Test, and The Saliva Test      Essentially, there are three general types of COVID-19 testing produced so far. One is the rapid test, the second is the saliva test and the other is the swab test. The rapid test (also known as the anti-body test) uses blood samples. The swab test… END_OF_DOCUMENT_TOKEN_TO_BE_REPLACED

The COVID-19 pandemic is one of the biggest modern pandemics known in history. Currently, there are more than five million confirmed cases in the world, with a total of 333,000 deaths. A total of 1.6 million of these confirmed cases are in the US alone. The world is currently in a race of finding a… END_OF_DOCUMENT_TOKEN_TO_BE_REPLACED

Despite concrete data and research, people’s opinions will always be diverse when it comes to a variety of topics including religion, politics, gender, and more. Denial is a common reaction to many important discussions and serious world events. The COVID-19 pandemic does not differ from any issues and is subject to opinions from critiques all… END_OF_DOCUMENT_TOKEN_TO_BE_REPLACED

Back in January, when the Wuhan, China coronavirus broke out, it didn’t make it to the front page of newspapers, in print or virtual form. Today, January feels like a lifetime away. Like it or not, people around the world have adapted to the new normal – staying at home, frequent hand washing, and social… END_OF_DOCUMENT_TOKEN_TO_BE_REPLACED

Since the beginning of the year 2020, the whole world has been stupefied by the rapid spread of a deadly coronavirus known as COVID-19. World superpowers in the West were unable to prevent the virus from reaching their borders. Because of this fact, the novel coronavirus COVID-19 became a world-wide pandemic no less than three… END_OF_DOCUMENT_TOKEN_TO_BE_REPLACED

For months since the start of 2020, the attention of the world has focused on immediate response efforts to contain and combat the novel coronavirus, also known as COVID-19. The deadly virus has pushed millions of people into isolation.  This kept people in their homes for weeks and months away from their work, their friends,… END_OF_DOCUMENT_TOKEN_TO_BE_REPLACED