by Justin Andress 4 years ago10 months ago

In Washington DC, downtown lobbyists are hiring more connected Democrats. High-ranking Republicans are whispering that the party’s 23-seat majority is in danger of drowning in a blue wave this November. The entire party is bracing for swift, crushing change thanks to the American people’s growing hatred for the spray-tanned lump currently living in the White House.

In these desperate times, Republicans throughout the country are taking their queues from the blowhard at the top, Donald John Trump, and old Donny John is sticking to his playbook.

The result hasn’t been pretty. At every level of government, Republicans are appealing to the worst members of their party. As the election looms closer and the Republicans get more desperate to retain their tenuous grip on power, their attacks get more vicious, and it all plays to one central theme: if it’s different from us, it’s trying to kill us.

On a good day, Donald Trump contradicts himself sixteen times before breakfast. That said, there is one issue on which the President has remained constant ever since he descended that stupid escalator to announce that he’d be crapping all over everyone for the next four years. Whether it’s the parade of immigrants Trumps believes to be streaming across the border at this very minute — they’re headed for Trump Tower! — or the constant erosion of American Awesomeness by … let’s call it “urban culture,” Trump’s only consistent point has been “different is out to get us.”

Now, some members of the rest of the party are picking up the reigns happily.

Rampant xenophobia? Check. Unbridled fear-mongering? Double check. Gleeful disregard for the truth? Checkerino. If you’re looking over your should for fear that you’ll be savaged by a glassy-eyed Democrat who’s foaming at the mouth, it must be election season in America.

In January, a Justice Department report was released that indicated a direct relationship between terrorists and people born in another country. The findings were immediately decried as misleading and biased by eighteen former counterterrorism experts.

The assembled team submitted a letter to Attorney General Jefferson Beauregard Sessions III (who totally sounds like someone who would support institutional racism, am I wrong?). The DoJ dismissed these complaints outright, sticking to the Trump administration policy of linking immigrants to terrorism and stoking the fear of all things even slightly foreign.

Ammar Campa-Najjar Is Trying to ‘Infiltrate’ the Federal Government

Just outside San Diego, Democrat (and Christian) Ammar Campa-Najjar is running for Congress against GOP dill hole Duncan Hunter. A Republican PAC working on Hunter’s behalf, to score points with Californian’s apparent fear of long names, released an ad claiming that Campa-Najjar was a third-generation terrorist hoping to bring down the United States government from the inside.

Smash cut to what would happen if GI Joe was a tube of toothpaste, Mr. Duncan Hunter, proudly supporting this flaming turd of a political stance. 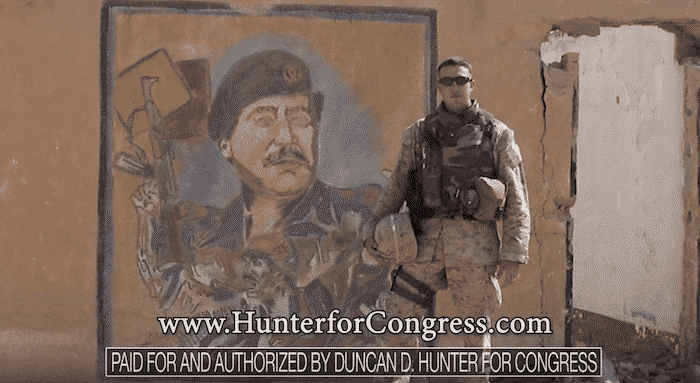 Hunter doesn’t seem to be setting himself up for political leadership so much as he is campaigning for chairman of the mob that’ll run Campa-Najjar out of town. Needless to say, these accusations are baseless, but it didn’t stop Campa-Najjar from having to take time out of his campaign to clear things up.

You don’t have to have any immigrants in your family tree to fall into the GOP “different is bad” trap. You can also be poor or not white. In New York, Congressional candidate and former hip-hop person Antonio Delgado is being denigrated because he once said the f-word and admitted he enjoyed women’s posteriors.

It’s true, the rapper-ator did once use naughty words in verses like the following, in which he brags about crazy rapper stuff like being well-educated and dedicated to pursuing “his truth.”

Did Delgado use spicy metaphors to liven up his rhymes? Of course. Did that make the rap songs any better? Absolutely not. That’s why AD the Voice eventually pursued his fallback plan: getting a degree from Harvard Law School as a Rhodes Scholar before working in one of the most prestigious law firms in the country.

But one time he also inferred that the first 42 presidents didn’t know what it was like to be a black man, so he must be trying to tear down the very pillars of American society.

The War on Diversity

Just two days after the worst attack on Jewish people on American soil in the nation’s history, the President renewed his assault on immigration, issuing a direct warning to a growing crowd of migrants currently undertaking the arduous march to the Mexican-American border. The so-called Caravan has been a hot topic for the president.

In the tweet, Trump implies that a bunch of gang members is swelling the numbers of the Caravan with the aim of sneaking across the border and wreaking havoc on good, God-fearing Americans. It’s a jazzy riff on Trump’s longstanding platform, and it adds fuel to the recent spate of racist behavior in the country.

It’s not surprising, then, that 54 percent of Americans feel as though Trump has directly or indirectly encouraged the behavior of white supremacists.

Things Aren’t Going to Get Better Right Away

It’s undeniably good news that Republican leadership and lobbyists alike are shaking in their boots as November 6 creeps closer. That said, victory isn’t assured — people thought Hillary was going to beat the pants of Trump-y in 2016. Should predictions play out, however, and should Democrats take back Congress, it’s not like Trump is the kind of dick who’s prepared to learn a lesson.

Hell, he’s already shifting blame away from himself in preparation for the defeat in November.

Trump’s bigotry will likely only get worse. As he feels his “popular” support waning, he’ll inevitably turn to his most loyal base, the tiki-torch-toting members of the white and proud movement. That means the odds are good these attacks won’t be the last we see from the far-right.