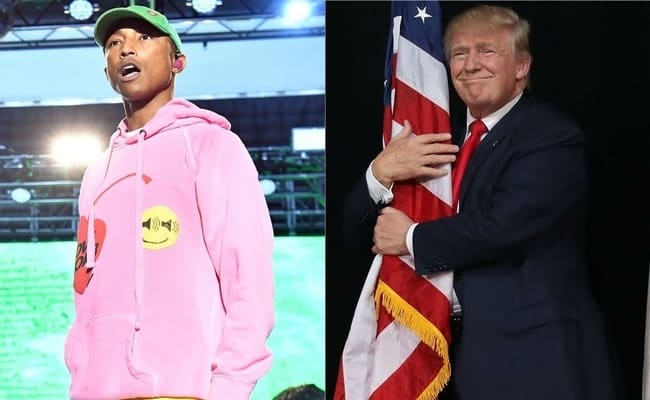 Pharrell Williams has sent President Trump a legal challenge over his usage of the song Happy on the day of the synagogue massacre in Pittsburgh.

Lawyers for the producer / singer issued President Trump a cease and desist letter after he played the hit song at a political event in Indiana “on the day of the mass murder of 11 human bring at the hands of a deranged ‘nationalist'”.

Donald Trump blared the tune at the Future Farmers of America rally in Indiana just hours after the mass shooting killed 11 people – preponderantly elderly Jewish Americans from a tight-knit locality – as they prayed on Saturday morning.

“There was nothing ‘happy’ about the tragedy inflicted upon our country on Saturday and no permission was granted for you use of this song for this purpose,” the letter read.

“Pharrell has not, and will not, grant you permission to publicly perform or otherwise broadcast or disseminate any of his music,” the letter continued.

It warned (the U.S. president) that use of the track constituted a copyright infringement and Pharrell’s trademark rights.

At the rally, Trump depicted the shooting as an “evil anti-semitic attack” that was an “assault on all of us”. Then, he played “Happy” and made a joke about having a “bad hair day.”

During his speech to the Future Farmers of America, Trump entered to the song “Happy;” joked about cancelling tonight’s rally because he‘s having a bad hair day; and used the anti-Semitic "globalist" dogwhistle hours after a mass shooting at a synagogue.pic.twitter.com/u8ANgnWzzE

Oh, and this is not the first time President Trump has received a cease and desist notification over his use of music at a rally.

RPGnet Bans Support For Trump From Their Platform

The Blood Test, The Swab Test, and The Saliva Test      Essentially, there are three general types of COVID-19 testing produced so far. One is the rapid test, the second is the saliva test and the other is the swab test. The rapid test (also known as the anti-body test) uses blood samples. The swab test… END_OF_DOCUMENT_TOKEN_TO_BE_REPLACED

The COVID-19 pandemic is one of the biggest modern pandemics known in history. Currently, there are more than five million confirmed cases in the world, with a total of 333,000 deaths. A total of 1.6 million of these confirmed cases are in the US alone. The world is currently in a race of finding a… END_OF_DOCUMENT_TOKEN_TO_BE_REPLACED

Despite concrete data and research, people’s opinions will always be diverse when it comes to a variety of topics including religion, politics, gender, and more. Denial is a common reaction to many important discussions and serious world events. The COVID-19 pandemic does not differ from any issues and is subject to opinions from critiques all… END_OF_DOCUMENT_TOKEN_TO_BE_REPLACED

Back in January, when the Wuhan, China coronavirus broke out, it didn’t make it to the front page of newspapers, in print or virtual form. Today, January feels like a lifetime away. Like it or not, people around the world have adapted to the new normal – staying at home, frequent hand washing, and social… END_OF_DOCUMENT_TOKEN_TO_BE_REPLACED

Since the beginning of the year 2020, the whole world has been stupefied by the rapid spread of a deadly coronavirus known as COVID-19. World superpowers in the West were unable to prevent the virus from reaching their borders. Because of this fact, the novel coronavirus COVID-19 became a world-wide pandemic no less than three… END_OF_DOCUMENT_TOKEN_TO_BE_REPLACED

For months since the start of 2020, the attention of the world has focused on immediate response efforts to contain and combat the novel coronavirus, also known as COVID-19. The deadly virus has pushed millions of people into isolation.  This kept people in their homes for weeks and months away from their work, their friends,… END_OF_DOCUMENT_TOKEN_TO_BE_REPLACED