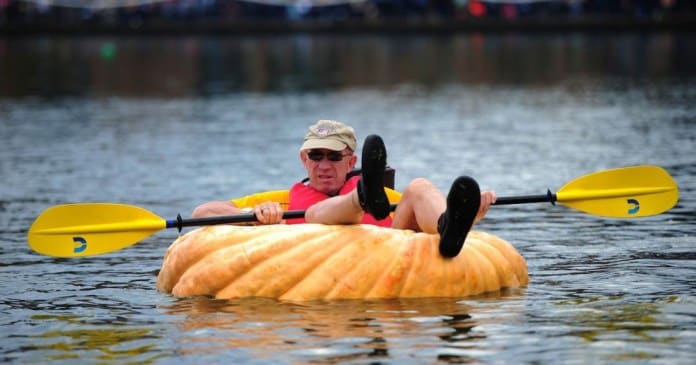 This time of year can get a bit out of hand with the pumpkin-everything stuff, but … c’mon!

A Britain fall attraction declared it has set a new world record by carving a 1,364-pound cucurbita pepo into the world’s largest pumpkin boat.

England’s The York Maze hauled the ginormous pumpkin to the River Ouse yesterday morning, where maze owner Tom Pearcy paddled it between Skeldergate Bridge and Ouse Bridge. The attraction posted via Facebook footage of the pumpkin boat’s maiden expedition.

“York Maze have applied to Guinness World Records to have this new record recognized,” a York Maze spokesman said to reporters.

“According to our research, the 619kg [1,364 pound] pumpkin to be turned into a boat by York Maze is heavier than any other pumpkin boats that have been reported in the media.”

Officials announced they found out Guinness World Records does not presently have a listing for the largest pumpkin boat. The pumpkin boat was raised back out of the water this morning and returned to York Maze, where it’ll be on display until the conclusion of the attraction’s November 4th Halloween festival.

If you’re going to spend money on pumpkins for Halloween, you’ll want the biggest return on investment. After you’ve carved and exhibited your Halloween pumpkin, you can re-purpose it.

Eating your pumpkin, is potentially the most pleasurable way to reuse it.

You can too make ‘pumpkin puree.’ Simply remove the pulp and seeds from the center of your pumpkin and scoop out the flesh for fresh-smelling pumpkin puree.