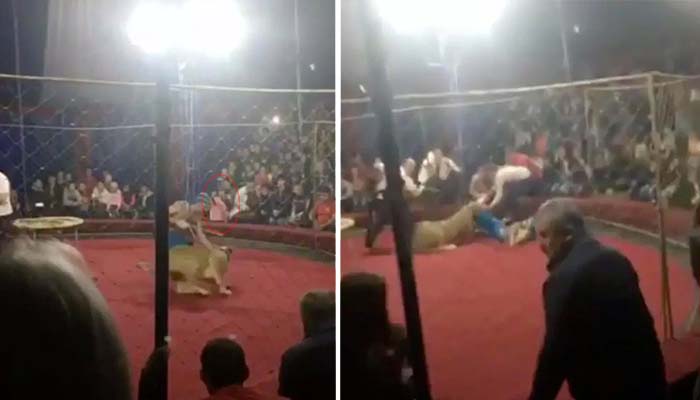 A four-year-old in Russia has been left scarred for life after being attacked by a circus lion.

The girl, named Ksenia, suffered severe face and chest injuries after being dragged into the ring by the big cat at a circus in the village of Uspenskoye.

The child had been waving a small flag when the lionness escaped from her trainer, despite being on a leash, and stormed towards the girl, breaking through the frail safety net surrounding the ring.

Valentina Pavlova, a member of the medical team who treated Ksenia Central Republican Hospital in Krasnodar, said: “There is a bite on her face that goes from ear to chin.

“An eyewitness said her mother had allowed the girl to get close to the safety net and to wave a banner.

“The lioness reacted to this and with its paw pulled the child inside into the arena and sank its teeth into her head.

“The circus team pulled the lioness away and brought the girl to the Central Republican Hospital.

“She is now in stable condition, there is no danger to her life.”

The girl is currently in intensive care.

Director of Big Moscow state circus, Edgard Zapashny, said the circus, trainer, and the child’s mother were all equally responsible for the accident.

“I firmly believe that the blame lies completely with the owner and director of that travelling circus, the lioness’s trainer and on the adult who came with the child and let go of her while being in the front row.”

However, the incident has led to further calls for predators such as lions and bears to be banned from performing.